MIDDLE class people are itching to have not read the new Dan Brown book.

Fans of distancing themselves from populist things have been unable to sleep at the thrilling prospect of never buying Inferno.

36-year-old Guardian enthusiast Emma Bradford said: “I loved not reading The Da Vinci Code, that was a rip-roaring boost to my intellectual self-esteem.

“The best bit was being able to feel better than something without guilt, because Dan Brown is not inherently working class like meat pies or being stocky.

“He’s just a hack writer for people who read for pleasure and I am definitely not one of those people.

“I just hope the main female character in Inferno is a juvenile stereotype of a buxom academic and that the clumsy, poorly-constructed plot takes wildly implausible liberties with history.

“Also it will be great if there is a one-eyed dwarf assassin called Ludovicio who speaks in grammatically incorrect Latin and most of the idiotic UK population thinks that is good.”

Senior graphic designer Julian Cook said: “Hopefully Inferno has a really lurid, horrible cover with flames and big embossed writing, because I will have great disdain for that when I see other reading it on the tube.

“Of course the hard part with Dan Brown is getting enough information so that you can mock his books but without people thinking you might actually have read them.” 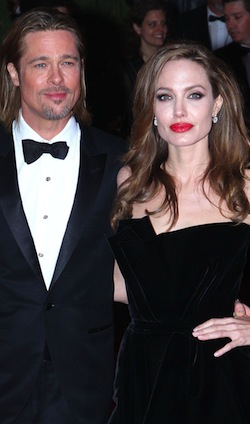 BRAD Pitt has revealed he had his testicles surgically removed seven years ago.

Writing in the New York Times, Pitt said he made the decision after realising he was going to lose them anyway.

The superstar actor and partner of Angelina Jolie said: “We met with a specialist who told us that because of a genetic predisposition there was a 98% chance that Anji would slowly take my testicles.

“I was shocked at first but then I looked into her amazing, terrifying eyes and realised it was completely inevitable.

“Since I met her my friends had been telling me that an Angelina Jolie-based lifestyle could cost me my testicles, but I was young and I thought, ‘this won’t happen to me’.”

Pitt added: “Anji has been the most amazing partner through all of this. She held my hand and whispered in my ear as the surgeons carefully chopped off my gonads.

“She now keeps them in a jar in a special room in the basement of one of our houses. I don’t know which one.”

Pitt revealed that the testicles can still produce sperm whenever Jolie decides she wants a baby.