Most People Able To Watch Friends Inside Their Head

CHANNEL Four finally agreed to stop the US comedy Friends last night after accepting that most people are now able to watch entire episodes inside their own heads.

The sitcom, about six mentally disturbed New Yorker twenty-somethings, has been shown round the clock on every available surface in the UK since 1994.

But now the broadcaster wants to make way for fresh, new American repeats, or original British programming that everyone just knows is going to be dreadful.

Friends fan Nikki Hollis, from Hatfield, said: "There's nothing I like more than coming home from work while watching Friends on a bald man's forehead before sitting down with a nice cup of tea with Friends on it and then watching Friends on the back of a spoon, or if I'm on a diet, then maybe the lumpy surface of a small ramekin filled with cottage cheese."

Tom Logan, from Finsbury Park, said: "I used to hate going to the toilet in the middle of The One With All the Rugby but then Channel four started showing it in my stream of urine.

"Now I can safely piss without missing the bit where Helen Baxendale's rugby playing British friend can't work out whether he's from Sheffield or Aberdeen."

Helen Archer, who likes to watch Friends dancing playfully across the surface of four or five large glasses of white wine, said: "Sometimes I dream that I am inside the show and watching it from different angles. But then again everyone does that, don't they?

Joanna Kramer, from York, added: "Once I dreamt I was locked inside the audio visual unit with Joey and we did it while Chandler was having a foursome in the canoe with Janice, the chicken and Ross's little monkey.

"While I can't be 100% certain, I am pretty sure I won't want to have bestial sex dreams about Everybody Loves Raymond."

MI5 Has Been Trying To Keep Things Secret, Says Judge 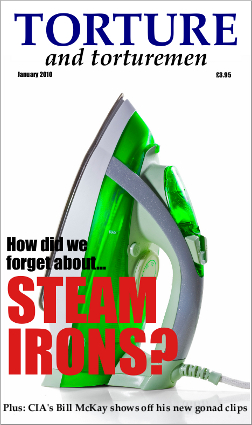 BRITAIN'S top judge has accused the secret service of trying to keep everything a big secret.

Lord Neuberger, Master of the Baps, said MI5 had been covering things up, evading perfectly nice questions and generally acting like some sort of fancy covert intelligence organisation.

He stressed that when he or any of his friends asked MI5 if it has been involved in torture he expected a straight answer and not a lot of 'Tinker Tailor jiggery pokery'.

Lord Neuberger added: "This country is in grave danger if the secret service is going to go around doing all sorts of clandestine things without telling anyone.

"If Britain is to be involved in activities such as torture then surely the details should be available to the general public in much the same way as a planning application, perhaps for a hardwood conservatory or a dormer window in a conservation area.

"In future I would expect to see the precise methods used and the locations of the torture chambers printed in local weekly newspapers, displayed on parish noticeboards or at the very least advertised in specialist journals such as British Torturer or Torture and Torturemen."

But MI5 sources pointed out that if they are expected to tell everyone everything all the time then they may as well just stay at home and watch Friends.

One senior intelligence officer said: "For example, if a spy is caught and the enemy asks him lots of important stuff then we would generally expect him to say loads of things that aren't true."

The source also dismissed suggestions that while it may be okay for MI5 to do a bit of lying every now and again, they really ought to tell the truth to important people like members of parliament.

He added: "If you seriously think that Al Qaeda is a greater threat to this country than some CND-loving, bisexual communist with a safe seat in some god-awful part of Lancashire, then maybe I should be torturing you."