THE new Sony PS3 games console will suck more of your existence into a vortex of pointlessness than the Nintendo Wii and the X-Box put together, the company promised last night.

Sony said the PS3 Slim represented the next level in utterly meaningless, hyper-addictive whirlpools of shapes and colours.

European marketing director, Tom Logan, said: "The new graphics card will make the not real things on the screen look almost as real as the real stuff outside your door, not that you'll ever be going outside again. It's basically just a load of crack, in a plastic box."

He added: "Owning a PS3 Slim is like being besotted with a beautiful but aloof 19-year-old French girl who despises you.

"You will worship her obsessively and she will remain coldly impassive, but you will come to relish the pain as you spiral inexorably downward into lonely insanity and ultimately oblivion. It's that good."

Adult men are already queueing to get their hands on the little black box that will allow them to pretend they are a special-ops ninja marine while slumped against the sofa, in their underpants, at 3am, in an empty house, with their penis out.

IT consultant and games enthusiast, Peter Stone, said:"I'll close the curtains, plug my drip in and play until I drown in my own poop.

"I suppose my wife might complain but, to be honest, I think she may have moved out a couple of months ago. I'd better check."

Athlete To Be Checked For Balls 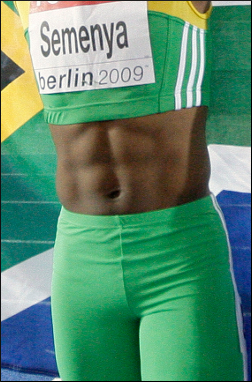 CASTER Semenya, the big, strong athlete, will today be checked for a pair of balls.

Semenya has come under suspicion after pumping her large, muscley arms in a way that made normal girl athletes look weak, vulnerable and pretty.

Officials from the International Athletics Association will today perform an eight-point ball check on the South African.

The test will involve Semenya removing her trousers and pants before a team of gender recognition specialists shine a torch between her legs and start poking about with a long spoon.

An IAA spokesman said: "If we can't see the balls immediately we will then ask her to turn around to make sure she hasn't shoved them between her legs like that freaky bit in Silence of the Lambs.

"If we find at least one ball then there is a 60-70% chance that she's not really a girl. If we find a great, big cock then the chances increase to about 90%."

He added: "We will also be searching her room and her luggage to make sure she hasn't hidden her cock and balls inside an old shoe or an empty milk carton."

Professor Henry Brubaker, of the Institute for Studies, backed the tests adding: "Normally, when there is a suspicion over someone's gender the first question a scientist would ask is 'does she have balls?'.

"If the answer comes back 'yes' then what you've got is either a male human or that strange, halfway-house mutant that usually ends up in an Irish boy band."