The rapturous reaction to the trailer, which alternates three seconds of footage with two seconds of inky blackness, has convinced director JJ Abrams to do the entire film like that.

He said: “You won’t get more than six seconds of footage at a time, and even then only if it’s featureless desert with a bloke popping up at the last moment.

“The film will cut between a silly robot, a woman piloting an air-conditioning unit, a Jedi in the woods and the Millennium Falcon looping about, in that order, for two hours.

“In between the narrator will say things like ‘A force has awakened’, ‘A war is coming’, and ‘The future is beyond us all’.”

Property developer Joseph Turner said: “It doesn’t fucking matter does it, I’ve still got to go and see it. I signed that contract back in 1977 when I was five years old and there’s no getting out.

U2 skips straight to reunion tour 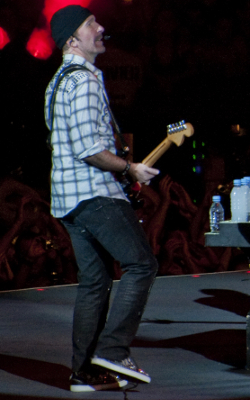 U2 will skip an inevitable decade of falling sales, a split and solo albums by going directly to the long-awaited reunion tour, it has been announced.

Has to relearn playing that one note through a delay pedal

The band has announced that members have overcome their personal difficulties, that the classic line-up is back together, and that tickets begin at £140 or £780 for a meet and greet.

Fan Tom Logan said: “I can’t believe that Bono, The Edge and those other two are back like they’ve never been away.

“I can’t remember exactly when they split, but presumably not long after 2000s All That You Can’t Leave Behind which is the last one anyone can remember.

“I’m glad they didn’t go the route of some bands, releasing a series of increasingly tuneless and derivative albums to an aging, disinterested fanbase.

“They’ve always had more dignity than that.”

U2’s official history now includes an acrimonious split, a bitter legal battle over the name, the 2009 No Line On The Horizon album by a U2 made up of Bono and former members of The Alarm, and this year’s triumphant reformation.

Bono said: “I took some time off to end world poverty, but now that’s done I’m delighted to be back with the boys.