THERE has been widespread outcry after it emerged that an 80s television programme was mostly just people dressing up as Nazis.

Following a furore over baker Paul Hollywood dressing up as a Nazi in 2003, it emerged that a long-running BBC series featured dozens of actors dressed as members of Hitler’s army.

A source said: “The programme was called ‘Hello, Hello!’ if you use the pronunciation that does not racially stereotype the French.

“The Nazis were shown in a comic context, usually in situations involving double entendres and someone’s surname sounding a bit like ‘knob’ or ‘fanny’.

“Apparently it was on television for several years, presumably offending millions on a weekly basis.

Meanwhile TV baker Paul Hollywood defended his choice of Nazi uniform fancy dress: “It was just a bit of fun. Mary Berry was actually head of the Waffen-SS during the war and nobody bothers about that.” 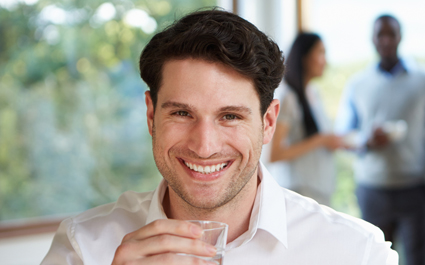 A FORMER working class man has marked his move to the middle class by ordering sparkling water, not tap, in a restaurant.

Julia Cook always previously opted for the traditional approach of emphatically telling waiters that tap water would be fine, but his change in status has led to a dramatic shift in behaviour.

He said: “Oh yes, it’s carbonated all the way for me now – I don’t even look at the price before I order it.

“And I have those big bottles of San Pellegrino to drink at home, usually while listening to a drama on Radio 4 or doing The Guardian crossword.”

He added: “If I’m feeling indulgent, I’ll sometimes pop a bit of organic cloudy apple juice in with it. Sublime.”

Other social status-based developments in Cook’s diet include the removal of all gluten, the introduction of industrial amounts of hummus and a switch from Coco Pops to museli that costs as much per box as an entire meal at Nando’s.

However, Cook is yet to fully assimilate as he still cannot work out why anyone would willingly consume kale.