People who act in films get rare moment of glory

SUCCESSFUL actors enjoyed a rare moment in the spotlight at last night’s BAFTAs.

A BAFTA spokesman said: “In a society where everyone is obsessed with teachers, nurses and engineers, film makers rarely enjoy the limelight.

“But people like Ben Affleck and Anne Hathaway work tirelessly for minimal remuneration and are generally ignored wherever they go.”

Accepting the Best Director award, Ben Affleck said: “Perhaps one day, when people are more interested in actors than people who drive forklift trucks, events like this will be watched by millions.” 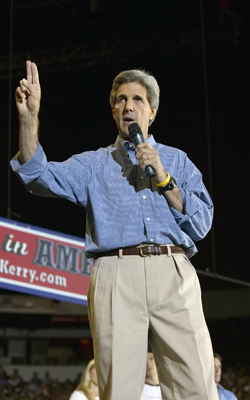 JOHN Kerry has stopped speaking English to avoid accusations of intellectualism by US voters.

In his first appearance as Secretary Of State, Kerry answered questions in a series of grunts and hoots to appeal to the key sub-lingual demographic of America.  He will be the first non-speaking politician to fill the role since John Quincy Adams eight year stint from 1817-1825 was conducted solely by thumbs up or thumbs down.

He was goaded several times in his maiden news conference to answer questions on foreign policy using recognisable sentences but managed to discuss nuclear proliferation in Iran by hitting a map with his forehand and screaming.

While his aides have suggested he will continue to use words in private, public engagements will see him interact with crowds by smelling their heads and then licking them on the shoulder.

Kerrys proficiency in his own language was used against him by Republicans in the 2004 election campaign, with the nickname ‘Word Homo’ ultimately costing him the presidency.

Posters depicted him beating children around the head with a typewriter and lurking outside a library with an erection and a dictionary.