A GARDEN with hedges and borders containing more than 16 tonnes of hand-shredded pornography has won a gold medal at Chelsea Flower Show.

The Television X Spank Mag garden, designed by Diarmuid Gavin, seems at first sight to be alive with blossom on every tree, shrub and perennial.

But when visitors step in, they soon realise the vivid colours come from more than 300,000 pornographic magazines shredded by volunteers from local comprehensives.

Gavin said: “We wanted to pay tribute to the bucolic woodland scene that, thanks to the advent of digital media, is sadly becoming a thing of the past.

“Once it was impossible to go for a stroll in the English countryside without seeing fragments of breasts and polyester underwear cheekily winking from every hedgerow.

“We’ve recreated that here with a blizzard of Asian Babes, Readers’ Wives and Big Ones, overwhelming the senses with a kaleidoscope of old-fashioned filth.”

It lost out on Best Show Garden to Monty Don’s Flytipper’s Dream, a recreation of a traditional layby complete with burnt-out mattresses, sacks of rubble and shattered computer monitors. 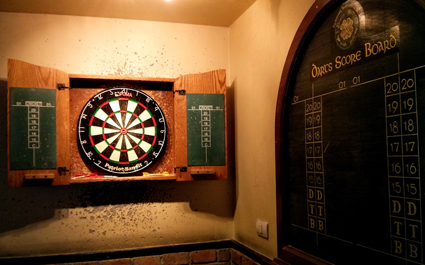 HIPSTER entrepreneurs are planning to re-brand darts as ‘flechette’, leaked emails have revealed.

But 34-year-old former hipster Tom Booker blew the whistle after finding plans for a Dalston ‘flechette’ bar called Oche too horrifying to contemplate.

He said: “I was working in marketing for the prick who started ‘Horlicks Cafe’ and ‘Outdoor Massive Jenga Cinema’. He wanted the darts bar to have the slogan ‘Where dart meets art’.

“The venue would charge £38 for a game of ‘flechette’ which is the French name for dart. The darts themselves would be made out of some special bullshit ‘hand-carved’ wood and cost £98 for three.

“There were also plans for a tie-in with a major streetwear brand that would ‘re-imagine’ darts shirts for sassy young professionals.

In the leaked emails Booker’s 42-year-old boss refers to him as “fella” and confirms that the darts bar will be “sick” and that “we will rinse a ton of cheddar out of this”.

He adds: “Do not let in anyone who looks like an actual darts player.”