Public Not Aware Simply Red Was A Band

A GINGER tit is to carry on singing despite announcing he was splitting up a band which everyone thought was just him anyway.

Mick Hucknall, 47, last night revealed he was planning to disband the group Simply Red because he had not been in the newspapers for many years.

However, to the disappointment of millions, he admitted the ‘split’ would not take place for another two years and that he is also launching a horrifying solo career.

Lisa Martens, 26, a pop fan, said she was devastated to hear the Mancunian song vandaliser was not giving-up completely but merely seeking to generate publicity for his forthcoming world tour.

Ms Martens said: “My heart leapt when I heard Simply Red were to be put down. But my boyfriend said that was impossible as the only real member of the band was the guy in the stupid fucking hat. It turns out that Simply Red is short for ‘Simply a Red-Headed Twat’.”

She added: “He’ll have to hire a band before he can split one up. Wouldn’t it save a lot of bother if the ginger tit would just shut the fuck up right now.”

Ms Martens has set up an online petition at www.shutthefuckuprightnow yougingertit.com calling on Hucknall to bring forward the 2009 deadline for the abolition of Simply Red. As of last night it had 54,345,623 signatories, including the ginger tit’s girlfriend.

Tom Logan, professor of music at the Institute of Pop, said: “There are plenty of real black people who make records. Why don’t people listen to them instead?” 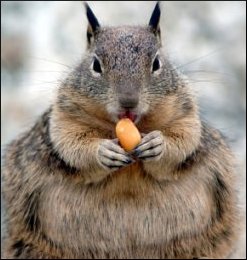 BRITAIN now has the fattest squirrels in the European Union, according to new figures from the department of health.

The average adult grey squirrel now weighs more than three pounds, compared to less than one pound 20 years ago.

Health experts have blamed the squirrel fat surge on easy access to fast-nuts and an increasingly inactive lifestyle.

Dr Wayne Hayes, of the Institute for Squirrel Health, said: "Grey squirrels are just not as busy as they used to be.

"Rather than spend all day foraging for food and scampering away from cats, they stay indoors playing Red Squirrel Holocaust on the Wii and watching repeats of One Tree Hill."

He added: "There is certainly a problem with the high levels of fat and salt found in today's fast, easy nuts.

"But we also have to look at the way nuts are being marketed to impressionable young squirrels.

"Every time a new Disney film is released we see these squirrel-friendly characters emblazoned across tempting, fatty nut bundles, instead of low calorie leaves and roots."

The government is now considering a range of options including a nut tax, a TV advertising ban, and an increase in funding for Jamie Oliver's Fat Squirrel Taskforce.