AUTHOR JK Rowling last night reacted angrily to claims that she has been seen smiling.

The author has successfully defended previous claims that she has a sunny, upbeat disposition and will seek a court order to protect her reputation as the world's foremost unreasonably miserable cow.

The accusation was made by a rival author who states that for prolonged passages of time during a book signing in January, Rowling had a face on her that didn't look like a recently bereaved substitute teacher.

Charlie Reeves, author of Loads Of Wizards That Go To A Public School And Do Spells, said: "Rowling stole the idea of being miserable from me. I have footage from 2004 that shows me begrudgingly signing books for the public as if each and every one of them was asking me to hand over a kidney.

"Before she saw me acting the mardy arse to the very people who pay my wages, Rowling used to rollerskate into her promotional events in clown make-up singing Shadduppa You Face."

But Rowling said: "I am saddened by the absurd and unfounded accusation that anything makes me happy, whether it's having more fans than Jesus or the fact I could hire the Archbishop of Canterbury to dress up as a Victorian prostitute."

She added: "By the way, those glasses look suspiciously round to me. I hope you have written permisson."

Helen Archer, a director at Bloomsbury, Rowling's publishers, said: "I've worked with her for eight years and the idea she would show the vaguest iota of joy is ludicrous. I remember when I told her she was now officially a billionaire and she looked at me like I'd just shot her dog.

"Her public persona is entirely original, the books on the other hand are as derivative as fuck."

Brown Threatens To Fly Plane Into Office Of National Statistics 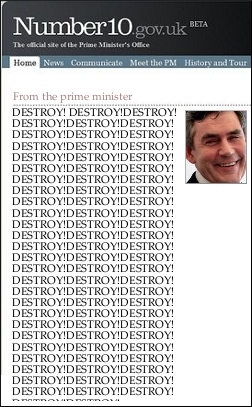 GORDON Brown was circling central London today threatening to crash his light aircraft into the Office of National Statistics.

Following renewed speculation that ONS figures will reveal Britain slipping back into recession, Mr Brown made his way to an airfield early this morning after posting a furious, rambling message on the Downing Street website.

Mr Brown wrote: "ONS bastard fuckers. Well let me tell you something so-called Britain, they're messing with the wrong psycho.

"I'll bring this whole tower of shit crashing to the ground. I don't care anymore. Do you here me? I DONT CARE! And by the way Piers, when I was at uni I fucked loads of birds. LOADS!"

Mr Brown then quoted from the Rudyard Kipling poem 'Gunga Din', posted a recipe for cheesy tuna bake and finished his message by repeating the word 'DESTROY!' more than 800 times.

Tom Logan, the prime minister's biographer, said: "This is all part of an ongoing feud between Mr Brown and the ONS. Every time he thinks he has a chance of recovery, they produce some figures that show the full extent to which he has fucked everything into a cocked hat.

"But you have to remember that it is Gordon Brown so the chances of him successfully targeting the ONS are less than nil. He'll probably crash into a really good state school or a profitable business."

Julian Cook, a solicitor from Hatfield who has been monitoring Mr Brown's progress through a pair of binoculars, said: "I have no particular preference as to which building he chooses to destroy, I just hope he's got Ed Balls up there with him."