SEVEN million people in the UK are illegally downloading the sort of music and films you wouldn't pay for even as you heard the ominous click of a gun being cocked.

According to the Strategic Advisory Board for Intellectual Property, illegal downloaders are accessing material that could be worth up to £120bn a year if it was any good.

A spokesman said: "Entertainers would be facing genuine hardship if it was not for all those people whose lives are so devastatingly empty that they will hand over good money to watch Daniel Craig do some of his own stunts."

But experts stressed that while seven million people may be getting free Katy Perry, there are 53 million others who would gleefully hurl themselves in front of a train rather than listen to a single, quirky note.

Dr Tom Logan, of Reading University, said: "I was astonished to discover there are websites where you actually have to pay to listen to Leona Lewis.

"And when I read that Shia LaBeouf has moved into a luxury villa, high in the Hollywood Hills, I begin to tremble with rage at the thought that someone, somewhere has given him money."

Dr Logan said that out of the top 10 illegally downloaded films, 'somewhere between nine and 11 of them are utter fucking rubbish'.

"The most popular film download this week is something called Fired Up. It tells the eternal story of two high school football players who sign-up for cheerleader camp where they discover the true meaning of friendship and bras.

He added: "Pass me a train timetable and a map. I have an appointment to keep." 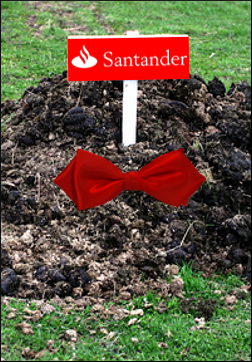 SPANISH banking giant Santander is to dress up its UK subsidiaries with a series of jolly, bright red bow ties, it was confirmed last night.

The group, which took control of Abbey National in 2004 after losing a bet in a pub, said the £50m plan would help to divert consumers from all the stinking heaps of fresh dung.

From July, the Abbey, Bradford & Bingley and Alliance & Leicester will be rebranded as 'Santander', a name that, according to some experts, is not only different from the previous names, but also comes across as decidedly foreign.

Martin Bishop, banking analyst at Donnelly-McPartlin, said: "It is difficult to change perceptions when an entire industry has been acting like crackheads rampaging through a Mexican casino at the end of Oliver Reed's stag night.

"But the clever thing Santander has done is to change all the signs, thereby making all the senior executives much better at their jobs."

Mr Bishop said the foreign-sounding name marked a watershed moment in British finance, adding: "Our banking industry is now held in such contempt that customers may actually feel safer handing their money to people who are openly Spanish.

"They seem unperturbed at the prospect of their hard-earned salary being used to do unspeakable things to donkeys and feel-up their teenage cousins, or just laze around all afternoon not doing what it's told.

"Who knows? In a few years time we may even have summoned up the courage to give our money to a Frenchman."