Seven more bullshit ways the government can attack the BBC

HATERS of the BBC are using Martin Bashir’s Princess Diana interview 26 years ago to claim it should shut down. Here are seven other equally bollocks excuses:

Remember when Russell Brand did the bad thing with Jonathan Ross? Lives ruined and a family torn apart, though that was mainly the tabloid follow-up? There’s life in that old dog yet. Ken Bruce is on Radio 2, where it happened. He should be fired.

Match of the Day

Host Gary Lineker and England hero turned traitor has ruined this flagship football show with anti-Brexit tweets. It’s not his job to produce pro-EU propaganda – if it was, it would be called Going Against the Will of the People of the Day. How can we trust him on Arsenal vs Watford now?

Suffers from a lack of balance in the guests. Fine for viewers who like showbiz lefities like Margot Robbie or Harry Styles, but what about those who want to see Mark Francois, Liz Truss or Tommy Robinson on the sofa next to Dua Lipa?

Turn on the socialist BBC and you’ll be forced to watch some pro-NHS propaganda such as this, Casualty or Doctors. By contrast, get Disney+ and you’ll be able to watch high-quality dramas like The Mandalorian, encouraging self-reliance and private sector policing. Another triumph for capitalism.

Notoriously bad soap opera set on a North Sea ferry. It was broadcast in 1981 so a BBC inquiry is long overdue. All previous director generals apart from the current good Tory one should retrospectively resign and pay back their salaries.

The Wombles had a blatant environmental agenda, spending their days recycling while living in a commune. The Extinction Rebellion of their time, it’s clear only budgetary concerns stopped Orinoco resorting to direct action and gluing himself to a plane.

What sick BBC minds created these monstrosities designed to scare children? And no attempt is made to show the positive qualities of the Dalek race, who had a strong belief in discipline and a real pride in their own planet. 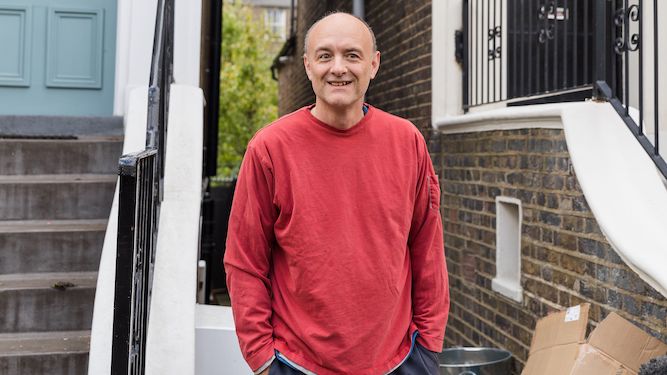 MILLIONS who hated lying bastard Dominic Cummings for years are ready to believe anything he says now he is slagging off Boris Johnson.

Cummings’s evidence about the government’s handling of the pandemic later today will be treated as gospel truth by anyone who this time last year thought he was a mendacious, dishonest shitbag.

Hannah Tomlinson of Croydon said: “Last May, I gaped in disbelief as the deceitful twat lied about his trips to Barnard Castle. But perhaps I was too hasty to judge.

“I also called him a Machiavellian sociopath who has destroyed the very fabric of our country when he was behind the Vote Leave campaign. Maybe I was wrong. People change.

“So I’ll listen to his evidence about how Boris Johnson ballsed up Covid and didn’t give a toss if we all died with an open mind, by which I mean I’ll accept it all without question.

“To be honest, if it was going to damage this government, I’d give Hitler’s ghost the benefit of the doubt.”

Michael Gove said: “Cummings? That one who we all defended as an honest man and good father last year? He’s full of it. Don’t believe anything he says.”