Six questions that really need answering about the Nativity

HAVE you always been a bit confused by the nativity story? Here are some issues the Bible – or its author God – really needs to clear up:

How can we be sure Mary and Joseph never ‘did it’?

They were married, there wasn’t TV or the internet, so why not give sex a go? The official church line is that Mary remained a virgin, so maybe they had sexual hang-ups. Their odd relationship needs a whole other gospel to explain called The Gospel of Relate.

Why does no one discuss what’s going on?

The nativity would really benefit from some exposition. Okay, the birth of Jesus is in a prophecy, but by who? It could be some idiot like Mystic Meg. And what’s the game plan with Jesus? What is the Messiah actually going to do? The Rise of Skywalker was clearer, and that was totally confusing bollocks.

Why does the song say ‘away in a manger’?

A minor, some might say pedantic, point, but baby Jesus wasn’t ‘away’ in a manger, he was right there.

Who were the three wise men?

Caspar, Balthazar and Lord Melchett are often believed to be kings. So surely they’d travel with a huge entourage including bodyguards? Just setting off on their own in the lawless desert with various valuables isn’t very wise at all, in fact it’s stupid. Also frankincense and myrrh are rather random gifts for a baby. Did they do a last-minute shop at Lush?

Why are we so chill about the Massacre of the Innocents?

Fearing a usurper, Herod had every male child under two in Bethlehem killed. Like, with a sword. You’d think mass infanticide might dominate the Nativity story, but it’s very much a footnote. The f**king donkey gets more attention.

Was it meant to be turned into a shit school play?

Is this how God planned to get everyone to worship him? And since He knows everything, past, present and future, does he cringe every year as he foresees your son fluffing his one line as Innkeeper while the other parents laugh at the tea towel falling off his gormless head?

Seven reasons why 1970s Christmases were the greatest 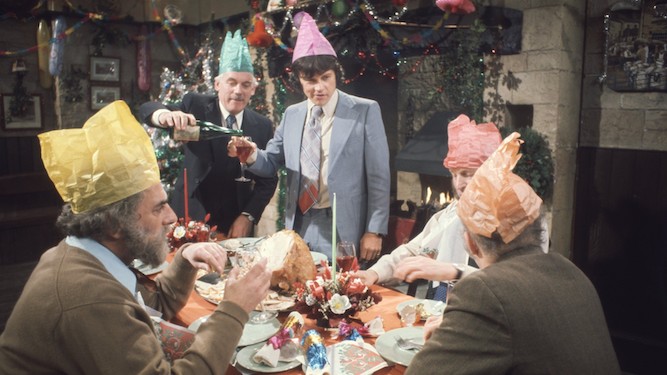 YULETIDEOLOGISTS have long agreed that 70s Christmases were the best. This judgement by men in their late 50s is objective fact. Here’s why:

Beats Cherry B and Watney’s Party Seven because this Dutch alcoholic custard was the tipple that told you that the festive season was here. Anything even slightly continental was exotic then. Also, washed away the taste of the rank wine you drank at morning Mass.

Before kids went soft with their Space Invaders, Crossfire was the most wished for and cherished Christmas present. You fired ball-bearings into your opponents’ goal with plastic guns, the excitement making you forget the agony of the blisters on your forefingers at least some of the time.

This was the golden age of light entertainment. A Merry Morning With Jimmy Tarbuck, Jim Davidson’s Boxing Day Laugh-In, The Reg Varney Hour and a specially extended Christmas Crossroads in which Meg and the staff let their hair down. All ringed with your trusty felt tip so that you didn’t miss any of the fun. No ITV though, because you had to buy a separate magazine for that.

Games of Monopoly that went on until everyone passed out

These were the years before Britons developed Thatcherite ruthlessness and families were content to go round the board like London tourists without bothering to build up property portfolios to crush their opponents. By 4.15pm everyone was asleep, waking up five hours later for a boiled egg sandwich.

We were more modest in the 1970s, not given to outlandish coloured light displays. We held the steps while Mother went up to the loft for a cardboard box of red and green paper links, held them again while she pinned them up in the living room, job done, break out the Quality Street.

Tins of Quality Street were massive

They were actual tin and they contained five pounds of chocolate. Small children could drown in them. Opened well before Christmas, they were still going at the end of January. Today’s tubs are shallow, plastic puddles.

Cracking walnuts wishing they were David Cassidy’s testicles and turning as crimson as a paper crown at The Sweet, your Grandfather’s fury at the parade of glammed up longhairs was a festive highlight. ‘I’ll give him My Coo Ca Choo! He wears frilly knickers and a bra and all!’