Six rebel songs that are bollocks now you're old and sensible

REMEMBER these rebellious songs that had you righteously aflame in your youth? How misguided they seem to older, wiser, middle-aged you.

Another Brick in the Wall (Part 2) by Pink Floyd

Teachers – who are sadist perverts – turn pupils into mindless, conformist zombies. Or, looking back, they did their best with Richard III and wanted you to go to university. Pink Floyd made more sense when you were shitting yourself about not revising for A-level maths.

Killing in the Name by Rage Against the Machine

Pointing out racism and hypocrisy are bad doesn’t feel like as urgent and necessary now. Also, ‘F**k you, I won’t do what you tell me’ is not a phrase you can ever use unless you want a written warning, to be ejected from Nando’s or to be a truly terrible spouse.

All You Need Is Love by The Beatles

As your many failed relationships can attest, you need a bunch of other stuff, including but not limited to: money, vaguely interesting conversation, high standards of personal hygiene, the ability to read minds and, most importantly, a car.

Anarchy in the UK by The Sex Pistols

Smashing everything without a plan in place is a really bad idea. Weirdly you learned this from Brexit. So well done, Leavers, for having a grasp of international economies less sophisticated than a sneering teenager who performed while being gobbed on.

I’m Waiting for the Man by The Velvet Underground

Lou Reed’s New York drug subculture sounded romantic and exciting. Nowadays you realise it combined heroin withdrawal with waiting for a commuter train that might not show up, eg Southern Rail. You’re not totally square yet though. You’d try opiates if you could get them safely and reliably from Ocado.

Dr Dre, Ice Cube and Eazy-E were right to distrust the cops. But in fairness, they turned up quickly when your shed got broken into, and it’s lucky someone’s there to investigate dead bodies because you’d probably be sick. And you’re prepared to bet when Beats headphones are getting shoplifted Dre isn’t calling the Crips. 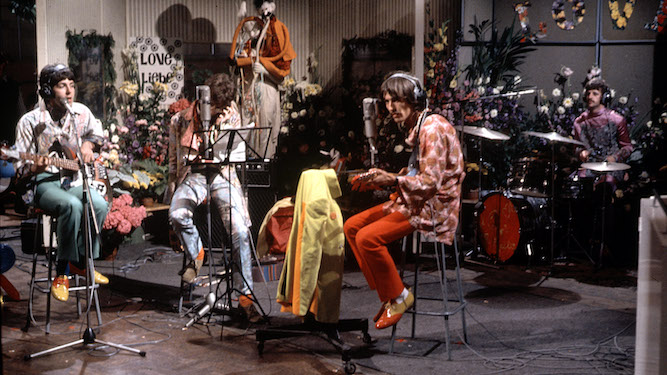 THE extended edition of Peter Jackson’s Beatles documentary includes an alternative ending where the Fab Four do not break up.

Making use of all available footage, the Get Back trilogy clocks up a runtime of over 57 hours covering the recording of Let It Be, the famous rooftop concert, a subsequent global tour and the recording and release of ten more incredible albums.

Director Peter Jackson, who made good films from 1987 to 1992, said: “You’ve got to use artistic license when adapting a story into a movie. And you’ve got to make it longer. Much, much longer.

“This new, extended edition shows the Beatles rekindling their love of playing together, setting off on tour again and remaining the most popular band in the world for another two decades via multiple, lengthy endings.

“Viewers will see George Harrison admit that he was being a bit uptight all along, Paul and John make up, Ringo really develop as a songwriter and won’t see Yoko at all because she’s been digitally removed.

“We’ve created all the later performances, and songs, using groundbreaking new technology just as the Beatles would have wanted. I know them so well through the footage I don’t need to ask.

“Just when you think it’s over there’ll be another scene. Then another. And another. It will go on for longer than you ever thought possible, long after the initial charm of these cheeky characters has evaporated. And longer still.”