Six tired, wizened old singers who really need to knock it on the f**king head

ROCK and pop music should be the preserve of angry, attractive young things. Here are six coffin-dodging has-beens who’ve long outstayed their welcome.

Rightly acknowledged as a legend for his past glories, but now he should be consigned to a retirement home where he can bore fellow residents to death – literally. That Grammy Lifetime Achievement Award in 2014 was a hint to call it a day he chose to ignore. Headlining Glastonbury this year, so you’d better really like the Hey Jude ‘na na na na’ bit.

Another old dog who won’t make a metaphorical final trip to the vet’s. Somehow touring again, with otherwise normal people spaffing a fortune to hear his handful of hardy jukebox perennials. Then again, we live in a country which voted for the most farcical charlatan in history as prime minister, so nothing surprises anymore. Has a sideline pestering his local council over potholes, which at least is age-appropriate.

Some classic hits, but her career was also shamelessly based on wankathon fantasies such as the Like A Virgin video. Sadly that’s literally a lifetime ago if you’re 38, and trying to disguise various body parts heading south with ever racier underwear is a bad idea. Not to mention the tooth grillz. Even rappers look shit in those, and Lil Wayne doesn’t wear them with a corset and thong, thank f**k.

Defied the odds by overcoming being born ginger and making millions from bland wine bar music. But that kind of lucky streak can’t go on forever. Now more like your mad uncle who lives in a caravan, he’ll eke it out for a good few years yet with compilations released at Christmas, just in case there are people out there who haven’t heard Holding Back the Years a billion sodding times yet.

Bruce rightly realised he’s reached an age where the long hair had to go. The only problem is that blathering on about ancient mariners and slaughtering daughters just looks silly when you’re 63 with a barnet like a bank manager. Time to leave the tight leather trousers at the back of the wardrobe, because you’re not exactly worrying about your pension contributions when you own a bloody plane.

Too young to class as ancient at 49? Possibly. Washed-up and out of ideas? Definitely. Has now revealed he needs a hip replacement, but is refusing surgery due to being too f**king delusional to realise age has caught up with him like it does with everyone else. Also… a hip replacement? It’s like Hendrix using a mobility scooter. Well, not Hendrix, he was really talented.

Will you be celebrating St George's Day enough or are you a filthy traitor? 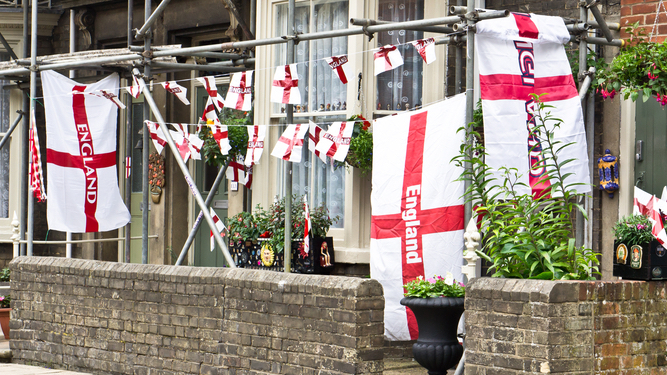 ST George’s Day – it’s the most important day of the year for every Englishman and woman. But are your plans extravagant enough? Read our checklist and avoid being a traitor to your nation.

Have you got shitloads of flags?

Your modest home should be ridiculously plastered in them. The overall effect should be slightly intimidating – keep passers-by guessing whether you just like a jolly national celebration or are a hardcore BNP fascist. It’s a shame there isn’t a hotline to report people who haven’t got a flag. Maybe email Priti Patel? It’s the sort of bollocks she’d be up for.

Is your historical knowledge sufficiently wrong?

Ignore irksome facts about the actual St George story (he was probably a high-ranking Roman soldier, countries like Bulgaria celebrate him too, etc.). Your truth is that George was a proper English knight like Sir Lancelot, and probably a decent bloke who liked a pint and watching the footie. This isn’t ignorance, it’s how we Brits do history. After all, the British Empire was an entirely benign undertaking that just did stuff like gifting backward Indian peasants with trains, right?

Will your celebrations piss off your neighbours until 3am?

Nothing says ‘St George’ like a garden party still pumping out Whitney Houston in the small hours as your neighbours toss and turn in bed praying for it to end. If you really want to be patriotic, mix your pop choices with war film themes like The Dam Busters and Where Eagles Dare. You can usually pick up compilations for 50p at a charity shop, so your undying love of your country needn’t hurt your pocket.

Is your celebration mostly based around getting pissed?

It’s the English way to make any celebration primarily about all-day alcohol consumption. If you haven’t already got a bathtub full of cold cans of Stella and lambrini you’re a traitor as bad as Philby, Burgess and Maclean and deserve to be hung, drawn and quartered outside the local civic centre with everyone filming it on their phones.

Have you built a monstrosity in your garden?

It’s increasingly normal to observe Remembrance Sunday by building a f**king lifesize Sherman tank out of cardboard in your front garden. On St George’s Day get a mannequin dressed as a knight and construct a large dragon that breathes real fire thanks to a garden sprinkler connected to a can of petrol. Yes, A&E departments will be full of people who had the same idea, but you’re not going to notice a few burns when you’re full of patriotism. And lager.

Are you planning to ‘patriot shame’ people you know?

You may be making the effort to get pissed and have a traditional St George’s barbecue, but some people don’t celebrate at all! If you see any of these Quislings a few words are in order, eg. ‘Didn’t see you celebrating yesterday, Gemma. D’you hate your country or something?’ For extra effect write things down in a little black notebook. Sadly there isn’t a ‘St George Gestapo’ you can grass them up to, but we can dream.