RIVAL TV cooks Sophie Dahl and Nigella Lawson should settle their differences by exploring each other's mouths on BBC2, experts have claimed.

Specialists in baking and lesbian erotica believe that kissing and perhaps some light fondling would ease the friction between the BBC's top purveyors of highly fetishised kitchen antics.

Cooking enthusiast Tom Logan said: "I would love to see these two excellent and consummately professional cooks reconciled on television, ideally after 10.30pm, when the wife is upstairs watching Crime Scene: Navy Crime.

"The BBC should get them in the kitchen together, perhaps making a toad in the hole or cucumbers and cream."

Nathan Muir, a viewer from Grantham who has thought it all through, said: "Initially the atmosphere between these culinary titans would be frosty and combative, but things would thaw when Nigella accidentally drips some batter or whatever down Sophie's blouse.

"Sophie would go to wipe it off but then Nigella would go, 'No, let me', in a posh, commanding voice that simultaneously oozes sensuality.

"After a bit of blouse wiping their eyes would meet and their feud would be ended with a bout of frenzied sapphic lust which would leave the kitchen looking like a herd of wild pigs have run amok in it."

TV pundit Nikki Hollis said: "The popularity of Sophie and Nigella can only be explained by the fact that a section of the male population is inexplicably unaware of the ready availability of free, explicit pornographic films in which actual breasts are visible throughout and celery sticks have been substituted for actual penises."

Muir added: "It'd be like Mulholland Drive, but with spatulas."

Cider Drinkers Too Arseholed To Give A Monkey'S 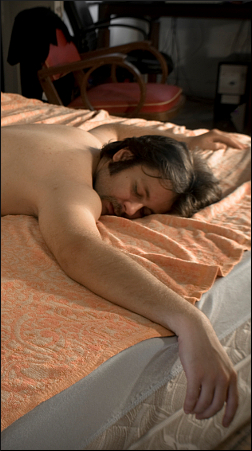 BRITAIN'S cider drinkers last night greeted the Budget with a glazed expression and a wide, peaceful grin before collapsing into a hedge.

As chancellor Alistair Darling outlined plans to slash Britain's £1.4 trillion deficit with a new supertax on Diamond White, fans of the beverage were torn between trying to get up or to just accept the situation and go to sleep in the hedge.

Roy Hobbs, from Peterborough, said: "I feel fine. I do, I feel fine. Tell you what, if each of you can just grab my arms. No, no. Stop. That's not gonna work. Let's just think about this."

Getting very serious for a moment, he added: "The thing about stuff is, right, is that it's all shit. It's all just a big fucking game. You know?

"So this guy says some stuff and other guy goes blah blah and then what happens? How the fuck should I know? Has anyone got any food?"

Meanwhile economists said the government's economic strategy would only work if the Diamond White supertax was accompanied by an ambitious national pothole fixing programme and a new version of Grand Theft Auto.

Julian Cook, chief economist at Donnelly-McPartlin, said: "We should also see some benefit from making first time buyers believe they would be slightly better off if anyone actually gave them a mortgage."

The chancellor also stressed that thanks to a dream he had, the fictitious deficit figures for 2014 were now much lower than the ones he originally made-up.

Declaring war on the people who pay Labour MPs for bullshit consultancy services, he added: "Those who made the wealth must be made to pay for making the wealth that has made them so wealthy."

But Martin Bishop, chief economist at Madely-Finnegan: said: "Labour and the trade unions always imagine it's the honest, downtrodden workers who really create the wealth and that rich people are basically characters from a Dickens novel.

"But of course if the rich people hadn't started the companies then, in all likelihood, the workers would be sitting around in their own dung, guzzling cider and picking the fleas out of each other's pubes."