A TEENAGER who thought he was just going around to see his friend has ended up trapped in a dad band jam session that may never end.

Nathan Muir, aged 19, was directed by friend Stephen Malley’s mum to the garage, where he found his pal trapped in an enthusiastic jam session with four dads clearly experiencing some kind of musical high.

Responding to frantic gestures by picking up a bass guitar, Muir has now been playing generically funky basslines for two hours with no end in sight.

He said: “Every time I try to leave, they hook me back in.

“The bald one on the Fender’s so delighted to have a semi-competent rhythm section that he’s letting loose all his hottest licks, the rhythm guitarist’s wearing an expression of crazed joy and the drummer’s sort of staring into the middle distance and I’m afraid of what’ll happen when he stops.

“We’ve done Fleetwood Mac, Parliament, the Stone Roses, at least three-quarters of Oasis’s back catalogue and the singer’s just heading into the terrifying zone of Neil Young.

“Stephen got called in by his mum an hour ago. Either he’s forgotten I’m out herE or abandoned me to my fate.

“I’d make a run for it, but the guy on the bongos keeps passing spliffs around and it’s seriously decent shit.”

Nobody sure why men showing their ankles 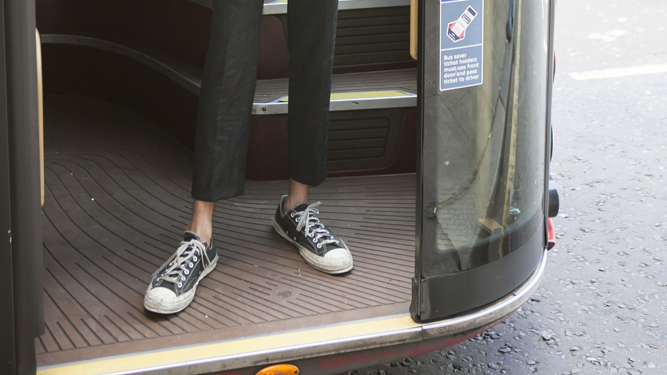 THERE is widespread confusion over men’s decision to start displaying their ankles, it has emerged.

As too-short trousers spread out of London to infect the rest of the UK, many have expressed uncertainty over exactly what ankle-showing men are trying to achieve.

Teacher Susan Traherne said: “Sometimes I might admire a man’s face, arms or even legs, but I’ve never been remotely interested in the ankle part of the leg. It’s just a bony lump surrounded by hair.

“I understand women’s ankles were considered quite arousing in Victorian times, so maybe they’re trying to woo time travellers.

“Back at school some boys had ankle-revealing trousers but that was because their families were tight or poor. I certainly don’t remember them attracting any compliments, in fact they would often be deliberately pushed over in corridors.”

Graphic designer Tom Booker, who likes to wear no socks with turn-ups and a little pair of Converse daps, said: “For decades society has told men that our ankles are somehow shameful, forcing us to adopt socks under the guise of hygiene.

“At last those days are over. Gaze upon the magnificent bit where my foot joins my leg. Surely it is proof that God exists.”