That Whole 'Stig' Thing Got Boring About Eight Years Ago, Everyone Tells BBC

THE anonymity of the Stig was vaguely amusing for about 10 minutes in 2002, the BBC was told last night.

As the corporation launched a multi-million pound legal battle to protect the identity of a man who drives a car on a television programme, licence payers across the country said there was absolutely nothing they cared less about.

Bill McKay, from Stevenage, said: “Do I think the Stig’s identity should be kept secret or not? It’s a tricky one isn’t it? Oh, I know – are you seriously fucking asking me that question?

“Get off my property before I put on some white overalls and a matching crash helmet and run you the fuck over in the sort of car you never see on Top Gear because it doesn’t do 280mph and has room for a bag of fucking shopping.

“Nevertheless it remains 100% effective at killing people who care about stupid shit.”

Martin Bishop, from Peterborough, said: “I really like it when Jeremy introduces him. ‘Some say he eats his own bum, lives in a golfbag and doesn’t have any eyes. We just call him the Stig‘. It’s brilliant.

“Actually, it’s not. That was a complete lie. I don’t like it at all. But of course I’m not an eight year-old boy.”

And Helen Archer, from Doncaster, added: “There is no more pressing issue for this country to address than its attitudes to Top Gear.

“For all those who get upset when Jeremy Clarkson says he wants to drive a Porsche through a nursery, what you have to remember is that he’s a dreary, pathetic, middle-England clichÃ© who couldn’t write his way out of a wet paper bag. Ignore him.

“Meanwhile, for all those who say Top Gear is ‘just a bit of fun’, then you fucking pay for it.

“And as for the Stig. His name is Ben Collins and the best he could do with his life was to go on television and encourage people to drive like dicks.”

Parking At Work Now Hardest Part Of Most Jobs 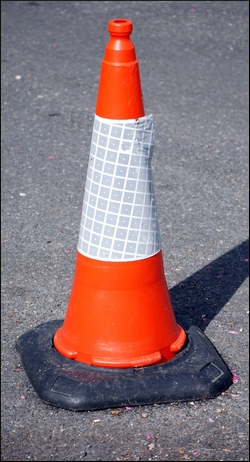 FINDING a parking space is the most challenging aspect of the average working week, according to a new survey.

Research found that locating a spot in the office car park that wasn’t already occupied by a car, a bit of a car or an ‘unexplained’ traffic cone, was 86% more emotionally and intellectually draining than the subsequent eight hours of staring.

Tom Logan, from Reading University, said: “The shortage of spaces at any given workplace means at least half the workforce is experiencing what’s known as ‘Titanic syndrome’.

“It’s the angry, panicked feeling of watching the last lifeboat disappear over the horizon with Billy Zane in it quaffing champagne, as you watch helplessly from the sinking deck, contemplating your total fuckedness.

“Except instead of freezing to death in the bottomless icy water, you have to go and park in the estate round the corner, where there’s a four in four chance of your wing mirrors getting kicked off by a shit. And you’ll be slightly late.”

He added: “We also found that you were absolutely right about the ‘unexplained’ cone. It is placed there every night by some fucker who works in accounts and keeps it in his boot during the day.”

Data entry clerk, Emma Bradford, said: “I just sleep in my car. I suppose I could leave the car and walk to a hostel, but it might get towed and crushed with me still in it, or worse I might get a note on the windscreen that’s been printed out so that I know they mean business.”

Sales manager, Roy Hobbs, said: “Not getting a space is wretched, but worse still is walking out of the office on a Friday to find some murdering Nazi bastard has blocked you in. You should be able to kill them and then impale their head on a car aerial.

“Richard Branson lets his staff do that.”