SENIOR Conservatives have attacked the new Margaret Thatcher biopic for its ‘disturbing’ lack of sexual violence.

Chancellor George Osborne said: “Meryl Streep never played a sexy role in her life, though I suppose hypothetically she did triple-team the blokes in Mamma Mia.

“I was thinking more Marlon Brando from Last Tango in Paris. Or maybe Ursula from The Little Mermaid.”

Former Welsh secretary John Redwood added: “Where was the Munich-style montage intercutting the sinking of the Belgrano, the invasion of Grenada and Thatcher forcing Geoffrey Howe to drink a pint of her warm urine?”

Lord Tebbit, Conservative chairman under Thatcher, recalled: “Once, her bra was clearly visible through her blouse. And she knew it. And we loved it. And that’s basically how the Poll Tax happened.”

London mayor Boris Johnson, said: “In my private moments, I dress as Maggie and ejaculate into one of her handbags that she gave me for being a good boy. Why must this film be such a massive cocktease?

“I’m going to have to nail my scrotum to the coffee table. Again.” 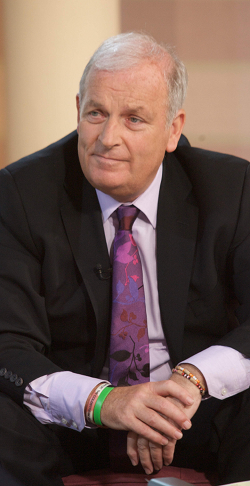 BRITAIN is to be dipped in antiseptic after hearing the oozing testimony of Kelvin Mackenzie.

The country struggled to decide which part of the former Sun editor’s evidence to the Leveson inquiry finally snapped the last morsel of their hope but it was generally agreed that the seat he sat on should be encased in concrete and fired into an abyss.

Observer Tom Logan said: “For some people it was hearing that our country’s nuclear weapons were controlled by a petulant buffoon and for others it was having it confirmed that some button-eyed antipodean walnut ultimately decides which buffoon that might be.

“But for me it was having to look at Kelvin Mackenzie climb up onto the moral high ground with all the natural grace of a hippo on a mantelpiece and then realising I had forgotten my shotgun.

“Although I admit, when he verbally savaged a woman whose baby died of cot death that did make a little bit of vomit leak out of my ears.”

Mackenzie was the chief perpetrator of the Sun for 13 years and was responsible for some of its most iconic atrocities, as well as making sure you could see both the nipples on page three.

He told the inquiry of Gordon Brown’s fury on learning that Rupert Murdoch was to stop pretending to be his friend and how Brown vowed to quit running the country and spend his time destroying Murdoch’s sleek media apocalypse empire using nothing but his brain.

He then acknowledged that he was not there when it happened and could not prove a word of what he was saying and anyway the Guardian are shits.

Logan added: “I need a cuddle.”