EVERY dad knows the coolest bands ever were the ones you were listening to in your drink and drug-addled 20s. Here are the bands your kids will think just make you a bit of a twat.

You never had the balls to dreadlock your hair, get a dog on a piece of string and smash capitalism, so The Levellers’ brand of earnest folk rock was a great way to rebel while finishing your degree. Your kids will just wonder why dad’s making them listen to folk music.

Being into The Prodigy’s edgy, anarchic electro-punk in the early 90s made you feel cooler than all your mates, and quite frankly, a bit tough. Modern kids will just identify a disjointed, aggressive din, but it will reduce your journey time by making you drive faster.

Bristol’s finest – which isn’t saying much – are the timeless epitome of everything hip and cool about trip-hop. Just make sure there are no Paracetamol in the glove compartment in case you decide to kill yourself on the school run.

Pompous alt-rock but you still think Urban Hymns is a milestone of modern music. The kids will hate it, and quite rightly for the pretentious string section. Let them listen to Katy Perry instead.

The psychedelic, spaced-out musical meanderings of London DJs Alex Paterson and Jimmy Cauty were the perfect chill-out antidote when you were coming down from class-A drug-fuelled clubbing in the late 80s. However the waves of dull ambient house might make your children nod off on the five-hour drive to Weymouth.

The whole Madchester, Hacienda scene was brilliant, right? And the Stones Roses were, and remain, the coolest group ever. Trouble is, your kids haven’t the benefit of being all pilled up and sweaty in some dingy indie club and will just wonder why Ian Brown excitedly shouts out of tune in the chorus of ‘I Am The Resurrection’, and why the instrumental ending to ‘Fools Gold’ has to last for about two weeks.

Diana statue a bit much 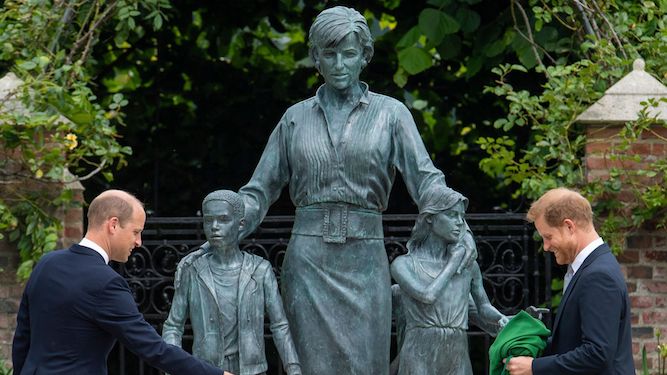 THE newly-unveiled statue of Princess Diana is a bit too much, Britain has agreed.

The bronze shows the Princess leading a group of multiracial children from hardship to happiness while looking gorgeous, which in all fairness is not something she actually did.

Onlooker Francesa Johnson said: “She was a wonderful woman taken too early and helped with landmines and AIDS and that. She made a difference. But this? Really?

“It looks like they’ve captured her emerging from the clearing smoke of a bombed orphanage with the barefoot refugee kids she’s miraculously saved, and as far as I’m aware that didn’t in fact happen. Though I kind of remember it now.

“Like, when we have a statue of Churchill we don’t pose him holding Hitler up by his neck with his other arm cocked into a fist. We trust people to fill in the gaps themselves.

“Plus it’s sort of a bit sexy, which I guess she was but doesn’t seem entirely appropriate in a sunken garden dedicated to her memory.

“It would only be slightly less tacky if they’d rigged it as a water feature to cry real tears. Which I imagine they considered.”