The six bollocks superhero movies that will kill the genre

SUPERHERO movies have hit such a low that next week’s is Shang-Chi from 70s comic Master of Kung-Fu. And they’ll only get worse:

A big plant that shambles around in the Florida Everglades, has a carrot for a nose, never says anything, attacks bad guys then wanders off. Was once in a comic called Giant Sized Man-Thing, which is funny. Will star in a Disney+ series which critics will treat like f**king Tolstoy.

Joker worked, so the next dark art-house movie about a Batman villain will focus on Oswald Cobblepot, a diminutive squawking man with an umbrella gun whose best friend is a penguin he stole from Gotham Zoo. Gritty cinematography, moody soundtrack, scenes where he chokes down fish whole on the subway, total shit.

Created by the artist behind Spider-Man, this character has buck teeth, a big furry tail and a squirrel pal called Monkey Joe. Can command squirrels to attack you in their hundreds which is actually terrifying. Positioned as breakout star of Phase V of the Marvel Cinematic Universe because they’ve got no-one else left.

DC movies somehow managed to scrape the barrel even when pitting Batman against Superman and it only gets worse. This stretchy f**ker not only loops around like Mr Tickle left on a radiator overnight, he’s also a crappy detective. His movie will be aimed at children whose nightmares he will haunt.

In absolute desperation Marvel greenlights a movie about a Canadian superteam that defends the home of maple syrup and ice hockey against international indifference. Finally makes even the most complacent popcorn-munching morons say ‘Wait, what is this shit?’

You can’t destroy an entire genre of movies without a late British entry that’s a critically reviled box-office disaster. Will ruin the career of star Kit Harrington, cause director Richard Curtis to retire and will render superhero films so toxic there’s not another this century. Thank f**king God.

Obviously I've only been appointed to piss off Remainers, by Ian Botham 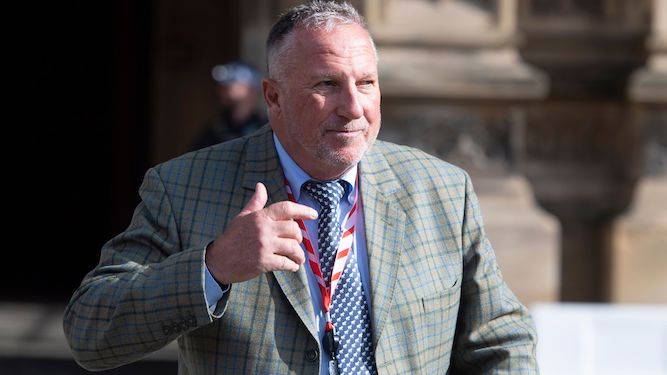 WHO the bloody hell would appoint a 1980s cricketer as trade envoy to Australia? Only Boris Johnson, and only to troll you. Here’s why I’m completely unqualified.

Beginning with my lack of relevant skills: I used to be incredibly good at cricket. I hit sixes and effortlessly caught a high-velocity cricket ball that would kill lesser men. What this has to do with trade deals is f**k all.

I have literally no understanding of quotas, basic economics or non-tariff barriers. Liz Truss didn’t seem bothered in the least, so that’s suspicious. With a bar this low, I could probably be prime minister myself.

Yes, it’s clearly about Brexit. As a vociferous Brexiter I’ve been appointed to annoy Remoaners. That’s fine with me because I’m rich, not exactly an intellectual, and casually believe in Brexit bullshit like stopping the Belgians making all our laws.

Liz said to me, ‘Beefy? We need to make a fuss about the single post-Brexit trade deal we’ve made. We need a man who the lefties can’t mock without looking unpatriotic, who goes to Australia loads anyway because it’s the only other place he’s famous.’

I said ‘I’m your man.’ She said ‘We used to have Prince Andrew as trade envoy but, you know.’ I said ‘That time I tweeted a picture of a cock I was hacked. Ask Robbie Savage.’

Put bluntly, cricket has bugger all to do with the UK economy. I’m not even sure why I’m a member of the House of Lords. I suppose it’s due to my excellent innings at the Ashes in 1981, which is a better reason than most Lords have got.

So I’ve been appointed to piss half of you off and Australia won’t be too pleased either. But rest assured I’ll make the deals. I’ve already secured 200,000 tonnes of dingo kidneys for your Christmas dinners.