The six people who are getting kicked off your Netflix account

NETFLIX is cracking down on the sharing of passwords after years of unregulated access. These are the six people in your life who’ll have to buy their own:

No problem because you only gave it to them to to have something to talk about and they never watch it, or so you thought. An irritated phone call tomorrow night will reveal they are balls-deep in a German sci-fi thriller and you’ve ruined their Saturday. ‘Your mother’s very upset,’ Dad will say as she clinks mugs pointedly.

You kind of resent this freeloading bastard still being on your Netflix, but he sells you weed sometimes, so whatever. Anyway, as a heavy stoner, he spends hours deep-diving into the most obscure Korean action movies and actually functions as a curator.

You knew full well your ex was getting good use out of your Netflix account. Some nights, feeling lonely, you’d click on and see what she was watching and watch it too. You fondly imagined she’d click your account, see it, and remember when you used to watch together. But she never did.

Instead she was pining after this arsehole, who had no idea it was your Netflix account and mainly watched American reality shows about tattoo artists on motorbikes. Your ex said it was her sister’s account and because you fancied her sister you believed her.

At this point your Netflix is being passed on like chlamydia. This girl’s never met you, doesn’t know she’s connected to you by three degrees of Netflix separation, and when disconnected tomorrow will begin an angry chain of texts culminating in a break-up that was indirectly all your fault.

You’ve never met Anders and he’s never met you. But in 2018 you went to Amsterdam, logged your account onto a smart TV in a rented apartment and never logged off. That TV was bought second-hand by Anders who assumed Netflix came with it. Now it’s gone and he’s f**king furious. He was halfway through Peep Show.

How to spend £37 billion and have f**k all to show for it, by Boris Johnson 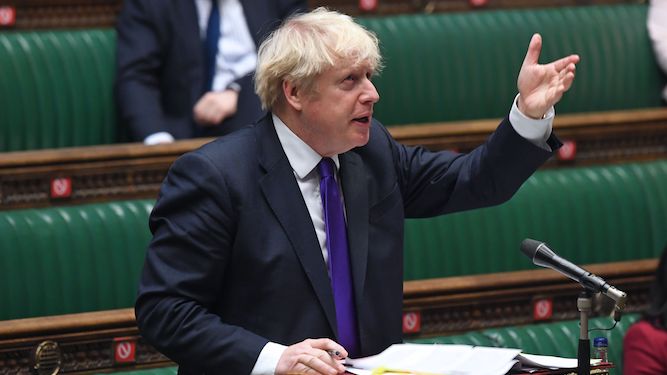 YES, I have just spaffed £37 billion on a useless track and trace system and Dido Harding’s grasping, clueless army. But sod you, taxpayers. Be grateful I didn’t spend it on these projects…

Whinging, so-called experts would say that such a bridge would instantly collapse into the sea. But it would serve notice to the EU that we will seek any solution, however calamitously stupid, to preserve British sovereignty.

Bung a billion to make Big Ben visible from space

With a major cash injection, we could rebuild Big Ben as a 50-mile-high, luminous, throbbing symbol of British potency. We’d give the money to the contractors first and if they said ‘Actually, that’s impossible’, well, we wouldn’t be so churlish as to ask for the money back.

Statues of me holding a whopping great syringe outside every hospital

Well, I am The Man Who Vaccinated Britain. I’ve spent more time playing with vaccines in laboratories than the geeky eggheads who invented them.

Who’s kept things running while all the shops are shut? Good old Amazon, of course. We could clap them on our doorsteps but why not just give Jeff a large cash sum, which he will surely share with all his employees.

A fund to rebuild Buckingham Palace out of solid gold

Does it make you a racist to think this is a good idea? The ‘woke’ brigade would say it does. But anyone who opposes this idea is the true racist. Just thought I’d keep that pot boiling.