THE new season of The Walking Dead involves a moment of hope followed by yet another gruelling journey, it has been revealed.

A production source revealed that the new series’ storyline will involve  some people finding a temporary haven – perhaps a church, school or other large municipal building – then having to leave when it is overrun either by zombies, psychopaths, or both.

The source said: “Last time we began with the characters safe, but then losing their place of safety. This time around they’re in great danger. Will they manage to find somewhere safe?

The source added: “You will wonder why you continue to watch this relentless torrent of the most gruelling misery imaginable, then concede that you’d already spent weeks of your life on it so it’s too late to stop now.” 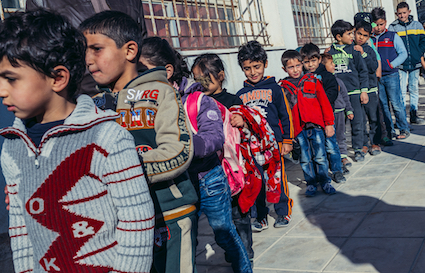 MILLIONS of Britons are surprised at how few seven-year-old refugees have journeyed alone across the whole of Europe.

The admittance of a handful of child refugees to the UK has seen widespread complaints that they are not small girls wearing artfully tattered clothing and clutching a one-eyed teddy bear.

Francesca Johnson, from Colchester, said: “My ideal refugee would be a girl aged between four and seven who lost her parents to the monsters of ISIS. Not Assad’s forces, that makes it too ambiguous.

“She’d have crossed the Mediterranean in a tyre and struggled through European countries filled with cruel stereotypes to reach the beacon of kindness and fair play that is Britain, but wouldn’t have aged in the face and would still have lovely pigtails.

“I’d accept boys, but with an upper limit of three years old because they’re not cute after that and get into mischief. Meaning terrorism.”

Roy Hobbs, from Darlington, agreed: “I tell you what, some of these 5,000 civilians fleeing the battle of Mosul look over 18 to me.

“I’ll need a bloody good explanation of why they didn’t stay in that warzone. Because they want to claim benefits, I bet.”