Which Glastonbury set are you boring the arse off everybody about today?

GLASTONBURY took place this weekend, you watched some of it on the telly, and you’ve decided the ___ set was so great it’s key to your identity. But which?

The firm, confident, straight-down-the-line choice of boring bastards, Sir Paul played a meandering set reminding everyone why he’s everyone’s favourite living Beatle by default. Brought on two previous Glastonbury headliners as special guests, making dads proclaim this as unquestionable value for money. You liked when he did the Bond theme.

Either you’re 20 and get it or you’re not and you’re trying too hard. One girl leaping and whispering does not a thrilling spectacle make, and a two-album career means a set full of deep cuts. You liked when she did the Bond theme, you say, even though she didn’t.

Having completed his rise to headlining fame without you ever having heard of him, you sat down to Kendrick last night and were pleasantly surprised. Lots of them had tunes, it was appealingly theatrical and way better than Kanye in ’15. Yes, you announce at the watercooler, Kendrick was your favourite. And because of that he’s not cool anymore.

Perfect for anyone sick of bands playing songs they don’t know, this set was the comfortable pair-of-slippers finish to a weekend where all the hyped acts young people like turned out to be shit. The band are both in their 60s and you’re in your 50s. You don’t feel this has any bearing on your decision.

Trad rock for dads with sax breaks by Zoot from the Muppets. Was on at sunset and has a couple that go ‘woah-oh-oh’ which is great for big crowds forlornly chasing their Glasto moment. Between-song chat was too Geordie to be comprehensible.

Notable for a jelly-mould corset which, you inform everyone after Googling it, represented Sheffield’s Meadowhall Centre. On mid-afternoon at the John Peel stage, which makes you discerning and erudite, not just bored at home at 3pm. ‘Easily my highlight,’ you pronounce to an audience of co-workers who couldn’t give a f**k.

Something at 6am in the Green Fields

Wait, were you actually there? Don’t you realise it’s way better on iPlayer?

Woman too sweaty to remove jacket 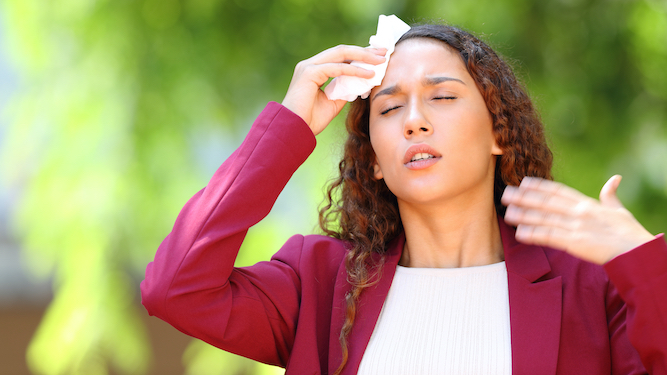 A WOMAN is bitterly regretting her decision to wear a blazer to work on one of the muggiest days of the year.

Emma Bradford of London, mindful of possible showers, decided that a blazer would be the perfect compromise between style and practicality until the very moment she started sweating like a bitch.

She said: “I’ve been sweating buckets the whole day because of this prick of a jacket. Which means I can’t take it off or everyone would see the massive wet stains in each armpit and down the back.

“I nipped to the bathroom to survey the damage during lunch and spent a few minutes jacketless in the hope the perspiration would dry without staining, but if anything the stress of it made me sweat more. Why did I wear a white top?

“The rest of the office is in light, loose fabrics and I’m sat in the corner, dressed up to the gills like some twat about to head up Everest. Never again.”

Concerned colleague Tom Logan said: “A wool jacket in June? We’ve turned the air-conditioning off and sent her to the windowless meeting room. This should be good.”