You haven't even seen the episode where she kills Thatcher yet, say Doctor Who producers

DOCTOR Who producers cannot understand why critics are calling the show ‘too politically correct’ when the episode where she kills Thatcher has yet to screen.

The new series has so far covered the civil rights movement, the partition of India, why Stalin was right and the evil of white men, all of which are undisputed historical facts.

But the upcoming New Year’s Day special where the Doctor kills Margaret Thatcher with a light sabre is expected to ruffle a few feathers.

Producer Carolyn Ryan said: “We’ve got to remember that this is a show for kids. They’re not interested in Daleks or Cybermen. They want the Doctor to tackle the real villains.

“The overarching baddie for the series is capitalism – obviously – but we’re dealing with that in all its vile manifestations such as the meat industry, the police, the gender binary and Western science.

“In the special the Doctor arrives in the devastated Britain of 1988, joins the courageous resistance fighting the Thatcher dictatorship, and executes the PM. The last five minutes is happy multicultural Britain dancing around her head on a spike.”

Ryan added: “Next series, the Doctor travels to 2016 to stop the Great Disaster of Brexit. None of this is remotely controversial.”

Woman knocking back gin advent calendar at desk every morning 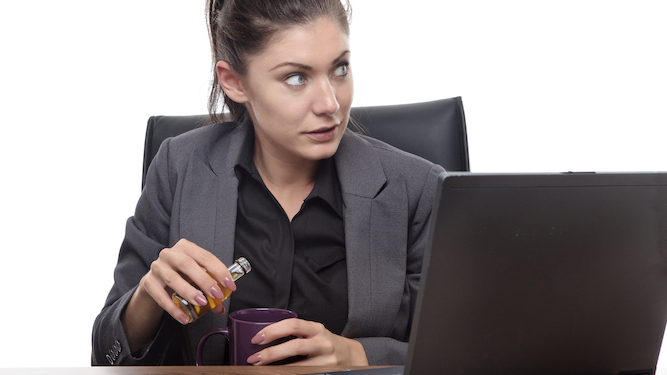 AN office worker with a gin advent calendar is knocking back the contents at 9am every day, colleagues have confirmed.

HR manager Susan Traherne surprised workmates by opening the calendar, remarking that she had never tried pineapple gin before, unscrewing the cap and downing the entire bottle in one.

She said: “What? It’s an advent calendar. That’s how it works.

“I don’t see anyone complaining about Martin having his Lindor every morning, or Angie having her Celebrations. This is no different.

“I’m hardly getting smashed off two units. Just takes the edge off and gets me in the festive spirit, you know? For example, when I found out who I’d got for Secret Santa, said ‘fuck off, no way’ and everyone laughed? That was the gin.

“They’re all different flavours in nice little bottles. It’s not like I’m having a nip from a bottle of Gordon’s under the desk. Now that would be concerning. This is just counting down to Christmas.”

Colleague Tom Booker said: “She’s leaving it here at weekends, so next Monday morning she’s downing three in a row. I wish I’d thought of it.”