A QUAINT little knick-knack shop selling curios for affordable prices must be a front for terrible evil, shoppers have agreed.

Odds N Ends in Swansea has low prices and few customers but somehow remains in business so is likely a front for the Mafia, the Triads or some kind of international society of contract killers.

Nikki Hollis, who runs the nail salon over the road, said: “I can honestly say I’ve never seen a single human enter except the old man who runs it. And he closes for lunch.

“I’m going to go the obvious route and say it’s probably drugs, shifted out of the back room in massive quantities. Jason at the newsagent thinks it’s money laundering, while Gemma who runs the Co-op swears it’s a brothel.

“Either way it’s something nefarious. No way can a shop survive on this street selling novelty keyrings and joke signs. Maybe people trafficking?”

Owner Roy Hobbs said: “No, it’s just that I own the freehold and don’t have high overheads so I only need to make enough to get by.

“That big lever in the back. Nothing. Certainly doesn’t open a hidden stairway to a murder casino for serial-killing billionaires. Now are you buying anything or what?”

Your step-by-step guide to painting a £10 million Banksy 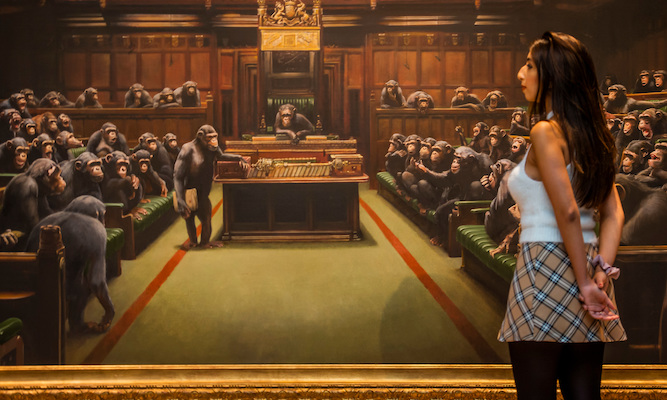 GRAFFITI artist Banksy has just sold a frankly bollocks painting for ten million quid. Here’s how to paint your own:

Step one: choose a trite subject

Find a subject that’s very slightly edgy but everyone basically agrees on, like McDonald’s being bastards or MPs being crap. That way you’ll trigger the little nodding dog in their backbrains and they’ll flock for selfies in front of it to show they agree.

Say you’ve chosen to shock the world with a piece about climate change being bad. But how to illustrate it? For inspiration, try looking at some terrible newspaper cartoonists churning out derivative crap and pitch your take one level below theirs.

You’ve chosen to depict a Boeing 737 airliner with skulls painted on the side to show how many people it’s killed, in a bold, hard-hitting piece guaranteed to cut carbon emissions by 90 per cent within the week. But how should it look? Obviously like a photograph crudely transposed into a four-layer stencil, because all Banksys are identical.

The perfect place for a piece like this would be an airport, but they have security. So instead go to any major city where loads of press photographers live, slap it on a wall and you’ll be on every front page tomorrow because the main story doesn’t have great visuals.

Who flies a lot? The super-rich. Target that audience specifically by producing a limited run of six canvases of this deathless and famous work, selling them for £300,000 each. That’ll show them for having private jets.

Step six: sit back and marvel

Well done! You’ve created great art, and you’ve got an extra-massive version stored away to sell for £10 million in a few years when the market’s risen. Time to sit back, relax and marvel at how incredibly rich this scam has made you.