A worker’s desperately-scrawled note in an order of Jamie Oliver cookery books described conditions in the Amazon warehouse, where the deadly robot is a constant lurking threat.

It read: “The depot has a grid-like layout, kind of like a Pacman maze but bigger that Newcastle. There is no natural light and once you’ve signed up you can never leave.

“Our job is to frantically pick books and throw them down a ‘despatch chute’. If we go too slowly the strange metal helmets we are forced to wear will electrocute us.

“Worst of all though is Goliath, the 12-foot tall robot who silently glides up and down the aisles. Even the slightest pause for breath triggers its extermination response.

“Goliath then asks for your nine-digit operative number, before opening fire with its arm-cannons.

“Nobody even looks up.”

An Amazon spokesman said: “We provide a positive and nurturing staff environment. It’s standard practise to have a robot guardian ruling without mercy.

“You get to read as many books as you want during break times.”

Jacket potatoes worried they are no longer part of the zeitgeist 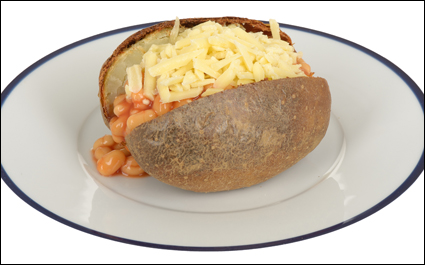 BAKED potatoes are worried that their glory days are over, it has emerged.

Large potatoes cooked in their skins were a popular menu fixture during the 80s and 90s, often commanding a disproportionately high retail price of up to £7.50 including two fillings.

Potato Roy Hobbs said: “Back in the day I would have been a pretty big deal on a plate with some unimaginative salad garnish. Everyone had a favourite jacket potato filling, and it was always beans and cheese.

“Millions of people, from bus drivers to celebrities, was munching on our soft interiors. Such was their enthusiasm that some would even eat our dry, parchment-like skin.

“Then wraps, panninis and noodle soups came on the scene. We weren’t worried at first but then they began to catch on.

Female potato Emma Bradford said: “Things go in cycles, we just need to hang in there. I’ve got an idea for a new filling, ham and peanut butter, it’s very ‘hipster’ as I believe young people say.”

She added: “I am made from the same stuff as chips but am less fattening.”