Apple To Ruin Your Life All Over Again

IPHONE users are set to return to their usual sobbing, foetal state with the release of IOS4.1.

The new operating system promises more inventive ways of reducing phones to an unresponsive lump of plastic costing more than your first car.

Apple obergruppenfuhrer Steve Jobs said: “We calculated that the soul-destroying horror of IOS4 had just started to fade in people’s minds and they were probably starting to piece together the remnants of their shattered lives, so it seemed the perfect time to fuck some shit up.

“New features include a small, mechanical hand that pops out every hour and flips you the bird and a pair of feet that sprint toward the pocket of the nearest mugger.

“It makes your phone look like the 1970s children’s cartoon Ludwig. And yes, the fact that you can’t understand that simile without looking it up on your iPhone was intentional, you dreary scum.”

Iphonologist, Wayne Hayes, said: “This is a continuation of Apple’s protracted campaign to demonstrate just how much they soul-deep hate you. Perversely, the more of their products you buy, the more contempt they have for you.

“If Apple eventually become the real-life equivalent of Cyberdyne Systems – and I’m not suggesting for a single second that they won’t – the Terminators will automatically look like the sleek traffic cop version rather than the lumpy racist one.

“The big difference will be that Apple’s Terminator won’t be compatible with any other machine on the planet, will be covered in deep scratches after eight minutes’ and will run out of battery after 30 seconds of sprinting after John Connor.”

Meanwhile, Martin Bishop has asked his iPhone what he has done to upset it so much. Kneeling outside the Apple store in central London, he cried: “Just yesterday I finally managed to replace all the photos and the phone numbers and was hoping to move on with my life – now you want to destroy it all again. Are you a phone or my ex-wife?”

Londoners To Loathe Each Other In The Open Air 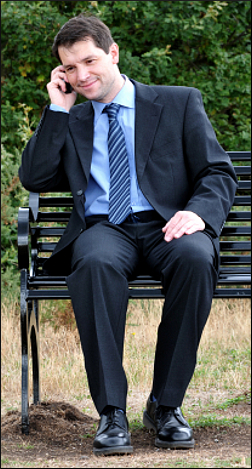 LONDONERS will spend today wishing death upon each other in a late summer festival of above-ground loathing.

As the hate-filled tunnels that take them to their worthless jobs are closed for the day, millions have vowed to make the most of their open air encounters with all the idiot bastards who would be wiped out by a cleansing virus if there was even an ounce of fairness and decency.

Tom Logan, Central line from Mile End to Lancaster Gate, said: “I hope it’s a nice day. There’s nothing better when the sun is out than despising every fucker in the world.

“There will be so many new faces for me to imagine pleading for mercy as I bear down on them with my dad’s old adjustable spanner.”

Experts have warned that the natural light and the extra inch of space may cause some Londoners to see each other as sentient creatures.

Professor Henry Brubaker, of the Institute for Studies, said: “Do not allow the slight humanisation of your environment to trick you into thinking these people are anything other than diseased rats with iPhones.”

Meanwhile, in a bid to cope, groups of commuters who regularly take the same tube have linked up through Facebook and Twitter and arranged to cram onto a bus so they can spend their journey grimacing at a familiar face.

Julian Cook, Southfields to Cannon Street, said: “I cannot function unless I have stared at egg sandwich guy for a full minute while dreaming of inscribing the words ‘chew with your mouth closed’ across his chest using an electric carving knife.”

Helen Archer, Clapham North to Holborn via Bank, added: “There’s something very traditionally English about sitting on the Clapham Omnibus and wanting every single bastard to be eaten by a werewolf.”

But some insist it will be a day for taking on London at a less frenetic pace and seeing the city from a different perspective. Emma Bradford, Kensal Rise to Oxford Circus, said: “I’m going to find a nice bench in Hyde Park and spend my lunch hour firing a water pistol filled with stale urine at some random strangers.