Bankers blame capitalism for their arrogance

BANKERS have blamed the capitalist system for thinking they are better than everyone.

RBS chairman, Sir Phillip Hampton, confirmed that all bankers, even the really thick ones, are self-satisfied pricks, especially when the government has to takeover their bank because they clearly don’t know what they’re doing.

But he insisted it was important to continue to pay all them very large sums of money so they find it impossible to think that anything other than what the bank does is absolutely right.

Other bankers backed Sir Philip stressing that blaming them for their own arrogance is like blaming gravity for someone falling over.

Julian Cook, a senior executive at Donnelly-McPartlin who invests in things that will never exist, said: “It’s like being in a club that no one else can join and that feels good. If you can’t get into the club that’s not my fault, it’s capitalism’s.

“You should send it an angry letter, filled with exclamation marks.”

He added: “If being wealthy and thinking I’m brilliant wasn’t so great I’m sure I’d be helping orphans who don’t have feet. But – and I stress that this is completely beyond my control – it is.

“So that means this evening I’ll be munching on slice after slice of prime beef and snorting gak off a fancy prostitute’s shimmering nipples while you got to Asda and buy a cheap thing that’s already been cooked.

“And there’s nothing you or I can can do about it, which is surprising because I’m so fantastic.”

Somebody bought a Segway 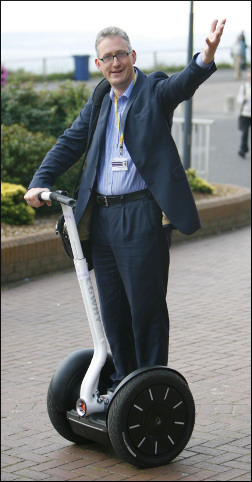 SOMEBODY actually bought one of those stupid Segway things, it emerged last night.

A ground-breaking test case has established that Philip Coates purchased one just over a year ago for Â£5000 of his own money.

District judge, Michael Rosenberg, told Coates: “There is a clear paper trail linking you to this contraption.

“And by the way – five grand? What the fuck were you thinking?”

He added: “I see that you have Lembit Opik in court today to support you. Can I just ask – what made you think that was a good idea?

“Perhaps you hadn’t noticed Mr Coates, but Mr Opik is the human equivalent of a Segway. And there he is, standing on a Segway.

“I just wish I could send both of you to prison. For ever.”

Mr Opik, who constructed his own Segway after seeing one in a magazine, said he uses it to get girls.

He added: “They love it when I stand naked on my Segway lecturing them about the dangers of asteroids.

Coates was fined Â£75 for being a tit and banned from riding his Segway on roads and pavements because even a child can see that it is obviously dangerous and wrong.