Banks Not Happy Until All That’s Left Is Banks

THE banks will not rest until they have destroyed everything that is not a bank, experts claimed last night. It's as if you never even existed

Economists now believe the international banking industry is in the final stages of a detailed plan designed to bankrupt everyone and then kill them.

Dr Bill McKay, of the Institute for Studies, said: "Stage one was to engineer a credit boom and get everyone up to their nipples in debt.

"Stage two was to create some bullshit crisis and then exterminate the housing market.

"Stage three was to beg for a trillion pound bail-out and leave all the governments teetering on the edge of financial ruin.

"Now we're at stage four – refusing to pass on interest rate cuts, killing off any remaining businesses and forcing absolutely everyone into bankruptcy and death."

According to Dr McKay the banks will then tower over a wasteland of abandoned shops and decaying corpses before stealing whatever small amounts of change they can scavenge from the pockets of the dead.

He added: "The last remaining bits of cash will be held by Mervyn King, sitting alone in his office in Threadneedle Street. But the banks will hunt him down and devour him like a horde of rabid zombie vampires.

"They will then bulldoze away the ruins of everything that was not a bank and build a new society filled with pathetic little men who spend all day lending each other money and rubbing used tenners into their groin." 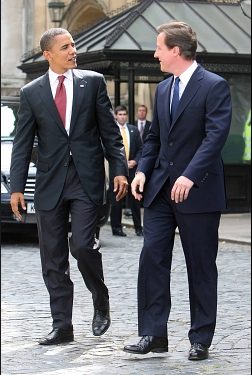 'Herbie Hancock? Yes, I'd love to'

As Barack Obama seized the White House to become America's darkest president so far, the prime minister and the Tory leader clashed over who he liked best.

Mr Brown said: "Mr Speaker, I've already phoned him. I was one of the first to phone him actually, because, unlike some people, I've got his personal 'cellphone' number.

"Mr Speaker, he said we're going to be totally best friends, 'brothers' if you will, and then he asked me to come to his house for dinner and stay over. And he said Michelle, that's his wife in case you didn't know, thinks that my wife is really, really nice."

The Tory leader said: "Mr Speaker, I'm down with him. We're going to see Herbie Hancock together. Just the two of us. Yes we are. The prime minister can sneer all he wants but we are. And we'll probably grab a beer afterwards and rap about politics and shit."

Bill McKay, professor of public policy at Reading University said: "It's natural for them to want to exploit Obama's success and contextualise it within their own political narrative.

"But the problem is that compared Obama they're really just a couple of arseholes."

Meanwhile, a spokesman for the president-elect said: "Mr Cameron strikes us as the sort of person who would have owned Michelle's great-great grandparents.