TEENAGE boys are nothing more than younger versions of men, new research suggests.

Scientists at the Institute of Studies said the evidence showed that men and boys exhibited many close similarities, but chiefly an overwhelming instinct to insert their penises into anything warm.

During the research the scientists asked 30 teenage boys if it was wrong to pressurise their girlfriends for sex or use alcohol to get them into bed, and they all stared blankly at them as if they were insane.

When they posed the same question to a group of men they asked the researchers to repeat it slowly before asking sarcastically if they had any better ideas.

Henry Brubaker, of the Institute for Studies, said: "Bone fragments, DNA and the fossil record all suggest teenage boys and men are very closely related.

"But it only hits home when you place them all in a room together with a Jenna Jameson DVD and a pile of old Hustlers.

"Observing their ritualised behaviour, the way they use sticks, and mark out their territory with urine, there is little doubt they are in some way genetically linked."

Kyle Johnson, a 16 year-old boy from Southampton, said: "If you really, really loved me you would let me put it in, and if you don't, I know some other bird that will."

But his father Lyle said: "If you really loved me you'd let me do that thing that everyone says is even better than you think it's going to be. Shall I open that second bottle of wine?"

White Guys To Be Taken Out For A Pint 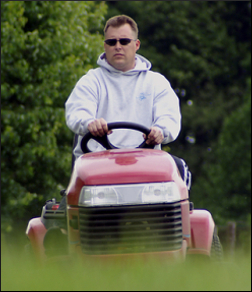 WHITE guys are to be taken to the pub this weekend and told they are good at things too.

After a week in which white guy egos have sunk to a new low, friends have rallied round and agree it is time for a few pints, some cheering up and perhaps even a curry.

Roy Hobbs, a white guy accountant from Peterborough, said: "I'm sure they're very nice chaps and they're obviously very good at what they do, but do they have to win everything?

"I mean it's bad enough, but then there's that other thing, you know? The, err… 'special attribute'."

He added: "What sort of chance does that give us? At least before we would win things and run things, but it was okay because they always had, you know… 'it'.

"It was like their incredibly large and satisfying trump card."

But psychotherapist Dr Emma Bradford said: "Come on now, I'm sure you're good at lots of things. Let's think. Mmmmmm… I know, what about golf? That's a white guy thing. Oh, right.

"Hang on, I've got one – I bet you're really good at watching television. What else? Oh, I don't know… gardening?"

She added: "And don't worry about the 'special attribute'. Women are much more interested in sensitivity and a really good sense of humour rather than power and money and an enormous… oh my."