I Will Release Bruce Forsyth Into The Wild, Declares Cameron 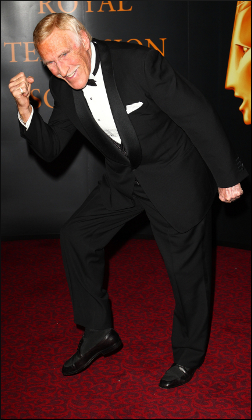 ONE of the first acts of a Conservative government would be to take Bruce Forsyth into some woods and then let him go, David Cameron declared yesterday.

In his keynote speech to the Tory conference, Mr Cameron said he was sickened by the sight of the once majestic Strictly Come Dancing presenter being forced to apologise by BBC homosexuals and communists.

He said: "Britain will not be free until Bruce Forsyth is free. Then, and only then, will it be nice to see Britain, to see Britain nice.

"When I am prime minister I will coax Bruce into a large wooden crate, stick him on the back of a truck and then take him to the Forest of Dean where he can run around all day telling people that Paki is just a funny word."

In a wide-ranging speech Mr Cameron also pledged to destroy the British government, force dead people to work in Asda and drag everyone up a mountain so we can see all the land that is owned by his wife's family.

He said: "There's a steep climb ahead but the view from the top is worth it. Especially if it's yours as far as the eye can see."

The Tory leader called for a country of self-reliant people who knew how to pitch a tent, tie a knot, start a camp fire and cook a sausage after a day-long hike up Ben Nevis.

He added: "Britain, let me be your scoutmaster. I promise I will never try to feel you up or take photos of you in your trunks."

But Liam Byrne, chief secretary to the Treasury, dismissed the speech, adding: "It's the same old Tory plan to push thousands of poor people off the top of a big Scottish mountain.