Entire office seems to be doing some sort of roleplay

EVERYONE in an office appears to be playing out a cliched role in a slightly over-dramatic way, a new employee has noticed.

Since joining a patio heater firm two weeks ago, accounts assistant Tom Logan has been puzzled by his colleagues’ attempts to make everything seem important.

Logan said: “I began to suspect they were weird when someone told me not to get on the wrong side of the HR woman, Tina, because she could ‘make life very difficult for me’.

“I doubt I’m going to have a bitter feud with a 55-year-old woman who’s nothing to do with me, unless working for a small business in Ipswich is a constant power struggle.

“The sales team are always shouting things like ‘Who’s actioning that?’ and ‘I’ve got your back, Steve!’. I think they’re pretending to be in the army.

“Then there’s the secretary, Lorna, who acts like she’s indispensable and has loads of influence with the boss. The most tragic thing is it’s straight out of Mad Men.

“I can understand people wanting a psychological defence against their own insignificance, but that’s no excuse for the security guard staring at me like Vin Diesel.” 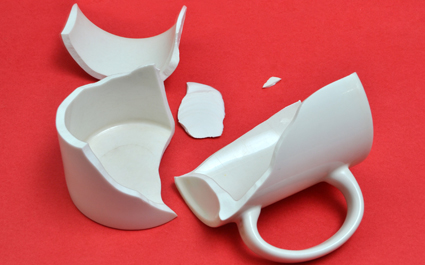 BRITAIN’S indigenous mugs are being wiped out by the larger and more aggressive Sports Direct mugs.

The huge blue, white and red promotional receptacles, which are over twice the size of a standard mug, arrived several years ago in big boxes from China and have since been multiplying uncontrollably. It is estimated that the number of non-Sports Direct mugs in the UK could now be as low as 600.

Professor Henry Brubaker of the Institute for Studies said: “Sports Direct mugs smash rival mug species by pushing them out of cupboards and off of draining boards.

“Cleverly masquerading as novelty items, they have become so ubiquitous that all other cups and mugs are being edged out of existence. And that is exactly what they want.”

Office worker Mary Fisher said: “The other day I heard a big crash in the work kitchen. On the floor was a beautiful, delicate bone china cup in hundreds of pieces.

“The cupboard door was open and it was literally bristling with those Sports Direct brutes. There must have been 14 of them in there and I’ve never even been in Sports Direct.

“I can’t say any more for fear of reprisals. Those mugs are big enough to drown in, you know.”