ESTATE agents facing falling profits are confident everyone will be as kind to them on their way down as they have been to others on their way up.

Following news that London agency Foxtons’ profits have gone down by 64 per cent, estate agents around the country are planning to call in the many favours they are owed by grateful customers.

Nathan Muir of Croydon said: “Looks like the ride’s over. Glad I put so much goodwill in the bank.

“I’ve got a network of friends – they’re not clients, not to me – around the whole city, and every one of them would be delighted to see me at the door.

“They know I worked as hard as I could on their behalf, never adding unnecessary or disproportionate charges, my only thoughts of how I could benefit them. They won’t forget.

“That’s the wonderful thing about working in property. You give so much. Now it’s time to take just a little of that love back.”

Muir was later found hanging upside down from a lamppost with a ‘Death to Profiteers’ sign hung around his neck. 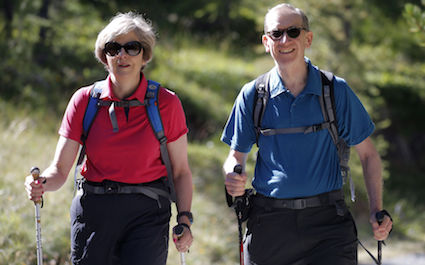 THE prime minister is spending her three-week walking holiday trying to come up with something even more ruinous than her last terrible idea.

May, who came up with her plan to destabilise the UK government at a point of international crisis while walking in Wales, is apparently hoping the Swiss Alps will inspire her next almighty clusterfuck.

Political commentator Joseph Turner said: “A week in Wales would bore anyone, but most people would deal with that by drinking and picking petty fights with their partner, rather than deciding to call an ill-advised election and embarking on a long, slow political suicide.

“The Alps are a bit more exciting than Snowdonia, but three weeks is a long time. Once she’s bored of Toblerone, who knows what mad shit she’ll come up with next.

“War with Finland, banning trees, mind-melding with the Queen. Behind that slightly gritted smile, the well-oiled wheels of chaos are beginning to turn in her mind. Fear what emerges.”

Turner added: “Of course, the real terror is that she’ll resign, leaving us facing an autumn of Jacob Rees-Mogg and Boris Johnson fighting it out to be prime minister.

“And the living will envy the dead.”