Despite attempts to mediate and find common ground between the two, anyone aged between 40 and 50 can tell instantly whether peers are Tiswas or Swap Shop and befriend or shun them accordingly.

“Swap Shop? Self-righteous, parsimonious bores who get nervous if they’re not being patronised by someone in authority. I won’t employ them, I won’t live next to them, and they’re without doubt unimaginative lovers.

“Sally James or Maggie Philbin? Come on. Some choices are who you are.”

Professor Henry Brubaker, of the Institute for Studies, said: “The bitter cultural sectarian divide between nasty, bubblegum-chewing louts who laugh at gunge tanks and stuck-up swots delighted by the clever joke of Posh Paws’s name is deeper than ever.

“This is more fundamental than Labour versus Tory, Leave versus Remain, IRA versus UDA. This is a generation polarised by their Saturday morning choices, their differences unreconcilable for life.”

Brubaker added: “Lenny Henry was on Tiswas. What did you sad fucks have? John Craven?” 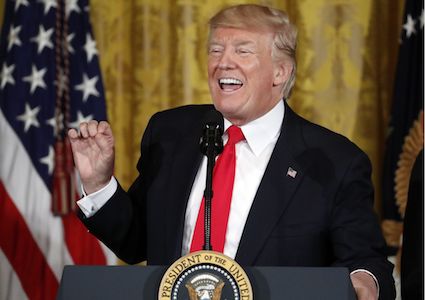 THE defeat of healthcare repeal in the US and the UK’s pathetic Brexit negotiations, has convinced experts that right-wing populist revolutions are fucking useless.

President Trump’s inability to repeal Obamacare and Theresa May’s inability to win an election has reassured other countries that the ‘rising tide of nationalist populism’ was actually just a collection of dickheads.

“Last November, with hard Brexit gathering momentum and Trump’s shock win, it seemed inevitable that the Netherlands and France would also fall to flag-draped racists and the whole liberalism thing would be over.

“But now May’s running squawking in circles waiting to be beheaded, Trump’s grand plan is to spend four years congratulating himself on winning an election, and everybody’s been rather put off.”

She added: “This isn’t The Nazis: A Warning From History. It’s The Twats: A Reminder Of Their Unfitness For Office.”