Hedge Funds Now Most Important Thing People Know Nothing About

HEDGE funds have overtaken the Big Bang as the most important thing people know nothing about.

As a massive American hedge fund faces imminent collapse, millions of people across the globe have found themselves panicking without the faintest idea why.

Tom Logan, head of markets at Donnelly-McPartlin, said: "This fund was over- speculated in long-term, prime-reverse wide-money.

"It could be devastating or it could be utterly insignificant. Would you like to buy a Range Rover?"

Meanwhile Nikki Hollis, 33, from Doncaster said: "It couldn't have been very strong. Did they get it from Homebase? I hope they managed to get all the little birds nests out."

Professor Henry Brubaker, of the Institute for Studies, said the confusion over hedge funds had arisen because many ordinary people were buying the Economist, but then reading it upside down.

He added: "Essentially, hedge funds are used to buy commodities like rice, jam, stock cubes and the like.

"When the stock cubes reach the agreed 'hedging' level the shares are transformed into something called 'double-bonded, hard-edged gilts' which then take on one and a half times their initial value for a period of around six weeks.

"After six weeks the buyer, or 'goose', can then hand them back or sell them 'up the chain'.

"If, at that point, the value falls, you become a homeless crack addict." 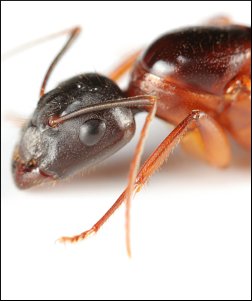 Most male ants are scheming oil barons with an arch nemesis called Cliff and regularly sneak off from work in the afternoon to sleep with their mistresses.

Women ants, meanwhile, are mainly secret alcoholics who constantly divorce and re-marry the same man, or shoot him three times in the chest.

Dr Bill McKay, of the Institute for Studies, said: “We surveyed more than one million ants living in 40 colonies using some of the smallest forms the Institute has ever developed.

“We found that while most of the ants did have breakfast together on the veranda every day they all hated each other’s guts, especially the married ones.

“Most ant men had employed people as ranch hands that subsequently turned out to be their illegitimate son from an affair they had completely forgot about.

“Many would also get divorced from their wives, engaged to someone else, discover that they were still in love with their former wife and then, after they had re-proposed to them, get run over by a car driven by their ex-sister in law, but they would not really die after all, although she would.

"At least I think that was it. It was all very confusing.”