RBS chief executive Stephen Hester has claimed his job is full of hidden dangers that could kill him.

The £1.2m-a-year banker told Radio Four that it was ‘depressing’ having to work in a building that has probably given him lung cancer and where man-eating tigers prowl the corridors, hungry for Hester-meat.

He said: “Every day I find the strength of character to be driven to the office where I then put on my protective jump-suit and spray myself with tiger-neutralising juice.

“But that stuff is useless if the tiger actually sees you. At least once a week I have to run like the clappers before diving into a broom cupboard and then sit there all sweaty and terrified in my jump suit as this huge tiger gouges great big chunks out of the door.

“It gets you down, it really does.”

Mr Hester admitted his asbestos and tiger-filled working environment would surprise all those who thought he probably just sat behind a desk all day, telling people what to do.

He added: “That is such a tiny part of it. God, I really wish it was like that.”

Last week the bank chief turned down a £1m bonus and has now admitted he considered resigning before looking up the word ‘indulgent’ and realising that it already applied to so many other aspects of his life and that to add to that indulgence would be seen as indulgent.

Mr Hester said: “It’s not about the money, it’s about the tigers.”

"Sorry, did you say 'mind-weapons'?&#8221; everyone asks Royal Society 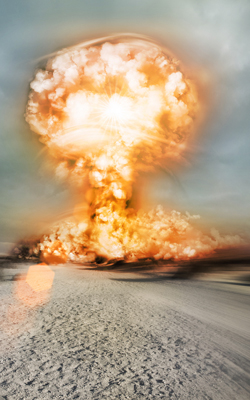 SCIENTISTS have been asked to confirm that they definitely said they could make brainguns and if so, when.

Researchers at the Royal Society produced a study into the possibilities of biomechanics, neurochemistry and how, one glorious day, we will be able to kill people just by imagining it.

Carlisle office ballast Wayne Hayes said: “My application to join the army is already in the post, as I’d assumed these unbelievably brilliant new weapons wouldn’t be available to civilians because if they were, the population would be in single digits within a month.

“If I end up squatting in some hellish dustbowl in the middle east with the entire country wanting to kill me it will be more than worth it for the moment I blink at a building and it blows up because I thought it.”

Development of the new weaponry is in the early stages but arms manufacturers have photocopied some pages from 2000AD to help engineers with what it should look like.

Sketches include a cool-looking headset with a glowing eye and the working title of ‘Psinfantry’.

Although the technology relies on weak electrical impulses from the brain being converted into signals for traditional ballistic tracking devices, the military have insisted that users will have to touch their temple with one hand, stretch their other hand out and whisper the word ‘Engage!’ to make it work, on the basis that this will look awesome.

Professor Henry Brubaker of the Institute For Studies said: “Isolating the neural paths responsible for decision making is an incredibly complex matter and we want to make sure this thing doesn’t end up killing the user every time he rubs his own eyes.

”So to be honest, having Michael Gove phone us up every 10 minutes asking when he can be an X-Man isn’t helping.”