A LOCAL odd job man has been forced to admit that certain tasks are too big or small for him.

Despite large writing on his van that claims otherwise, handyman Julian Cook has had to accept that the size of a job would become an issue in extreme cases.

Cook said: “Last week someone rang up and asked if I would come to their garden and move a twig six inches to the left.

“I’m not sure if they were taking the piss but I was not prepared to do that.”

Cook also admitted that if he were asked to paint the inside of something massive like the CERN Large Hadron Collider he would have to refuse.

He said: “It’s just me with a stepladder really, so I probably couldn’t paint an entire particle collider, although I might be able to recommend a larger firm that could.

“This is hard stuff for me to admit, because my entire personality is based on a flexible, can-do approach to practical tasks. It’s a bit like finding out there is no God.”

Trump sacks everyone who doesn't look like a recently-reanimated corpse 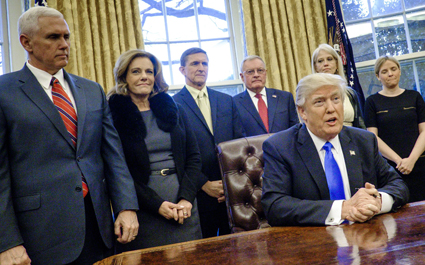 DONALD Trump has fired all officials who lack the blank-eyed stare of the undead.

President Trump confirmed that he would only work with unblinking barrel-chested freaks who appeared to have just climbed from a crypt to do his bidding.

He said: “These are great people. Top people. Undead people.

“Look at their empty eyes and their heavy, limp limbs. These guys aren’t going to disobey their master.

“You tell them to hide in a bush all night beside a lonely road waiting to ambush a traveller, they’ll do it.

“You tell them to bring you a beautiful woman whose picture you’ve just pointed at in a magazine, they’ll do it.”

He added: “I’ve got this one guy, he’s called Rince Pubis or something. That’s hilarious.”