Madoff Pleads Guilty To Not Being A Bank

FRAUDSTER Bernard Madoff yesterday pled guilty to not realising he should just have turned his failed investment firm into a bank.

Madoff, the former darling of Wall Street, told a New York court he was 'deeply sorry and ashamed' for being prosecuted when it would have been so much easier to have been bailed out.

He added: "When I heard about the huge amounts of public money being given to banks I suddenly thought 'oh shit'.

"You know that feeling you get when you've totally ballsed it up and you're just like, 'shit, shitty, shit, shit'. It was a bit like that."

Tom Logan, scams analyst at Madeley-Finnegan, said: "Bernard Madoff was taking money in, telling everyone that everything was okay and then, when the financial crisis hit, he ran out of money. Sounds eerily familiar doesn't it?

"After studying his business model very carefully I have concluded that the key difference between Madoff and the banks is the word 'bank'.

"If his company had been called Halifax Bank of Madoff or the Royal Bank of Madoff, he'd now be enjoying his retirement and laughing at all those people who wanted him to give up his pension."

Logan added: "All he had to do was open a couple of branches, stick a cash machine in the post office and get his staff to appear in a series of unwatchable adverts set to ghastly music.

"And when things got really bad he could always just have asked Gordon Brown to find him a big, stupid arsehole of a bank to merge with."

Is It Time To Tax The Shit Out Of Doctors? 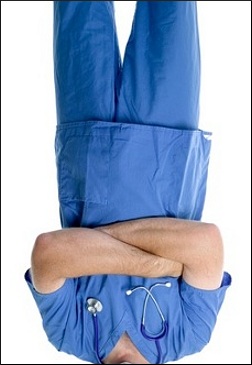 DOCTORS should be taxed every time they open their fat, smug, overpaid mouths, it was claimed last night. The healthiest way to hold a doctor

People across Britain said the money could be reinvested in the NHS and used to pay for nice foreign doctors who just treat you instead of making you feel like Adolf Eichmann every time you fancy a Star Bar.

As the British Medical Association called for the systematic annihilation of the country's entire population of Creme Eggs, consumers said it was time to take the UK's doctors by the heels and shake them while at the same time ignoring their calls for a ban on being held upside down.

Bill McKay, a slightly overweight shop owner from Harrogate, said: "If I take my car to the garage and the mechanic tells me that low quality motor oil should be banned my immediate reaction is tell him to shut his fucking face and fix my bloody car because that's all he's paid to do and if I want his overpriced opinions I'll fucking ask for them.

"But that doesn't happen because the British Mechanics Association isn't filled to the brim with arrogant, self-regarding pricks who think they own your body and prescribe whatever pills the computer tells them to."

He added: "There's two ways we can do this. Either we can tax them for every statement they make calling for something to be taxed, or we can take 75% of the hundred and fifty grand they've conned out of the government for spending an extra year at university."

Emma Bradford, a primary school teacher from Bristol, said: "I suppose I've brought this on myself because you see, I don't know what butter is and so I just keep piling it onto my Weetabix until Nigella Lawson tells me to stop."