SPORTS Direct boss Mike Ashley runs his business like a Victorian workhouse as a homage to his favourite writer Charles Dickens.

The Sports Direct founder has admitted that he only wanted to recreate conditions of abject Victorian poverty so he could see for himself what life was like in the works of the author.

He said: “I’ve got a calf-bound first edition of Little Dorrit, I’ve got The Old Curiosity Shop inall the original periodicals, and I’ve got controlling interests in six orphanages and a gruel factory.

“My dream was always to give ordinary people the opportunity to experience terrible, crushing deprivation which they could then either escape to live happy, virtuous lives or die in, nobly and tragically.

“I’ve modelled myself on Mr Bumble from Oliver Twist, on a strict dietary regime that means I never drop below 18 stone, and I’m incredibly heartless and cruel at all times.

“It’s so authentic. My only regret is that I’m struggling to reach my target of ten per cent of the workforce dying of consumption.”

Trump: ‘I am literally an eagle’ 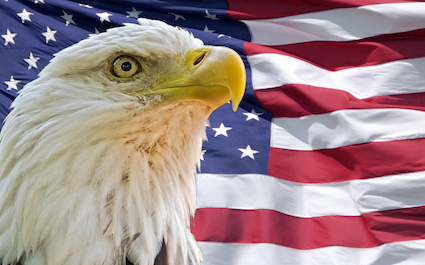 DONALD Trump has told America that he is actually an enormous eagle with red-and-white striped wings.

The Republican presidential candidate’s convention address revealed that he is a bald eagle with an 80-foot wingspan who holds a rolled copy of the US constitution in one claw and a handgun in the other.

He continued: “I scatter hundred-dollar bills wherever I soar, unless it is above America’s enemies where I drop bombs that hurt only the evil and never the innocent.

“Wherever my shadow falls there is freedom. Wherever I perch there is justice. I kept the peace in the Old West and I kicked Hitler’s ass in World War Two.

“The haters will say I am not an eagle, that I do not have magnificent plumage of red, white and blue, that God Bless America does not automatically swell behind me whenever I speak.