Other People's Bonuses Are Morally Wrong, Says Everyone

LARGE bonus payments to other people are morally wrong and should be banned, it was claimed last night.

Across Britain angry taxpayers said that if they got a six-figure bonus under the terms of their contract they would give it back straight away, yes they would.

Tom Logan, a trainee solicitor from Reading, said: "I wouldn't be able to sleep at night knowing I had been given all the money I am contractually entitled to.

"I'd just sit up in bed staring at the huge numbers in my bank statement, crying about how I really didn't deserve it and jabbing myself in the stomach with a fork."

Emma Bradford, a sales assistant from Kent, said: "If I got one of those big bonuses I'd give it all to Oxfam. Well most of it. Probably about half. Somewhere between a quarter and a third. How much is 10 percent?

"Then again a lot of that charity money just ends up in the hands of local warlords who use it to buy drugs for their guns.

"And of course the charities always make everything seem much worse than it is so we'll hand over more of our hard earned bonuses. Those people should get real jobs."

She added: "Having thought about it, 10 percent does seem a bit extravagant. Tell you what, I'll buy days of the week BMWs, a jacuzzi for my horse and a big, solid gold spoon and whatever's left I'll divide between Children in Need and those people who rescue the dancing bears."

Would You Like To See Our Balls? Ask Jamaicans 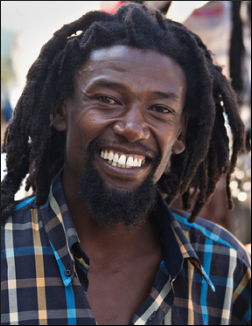 THE men of Jamaica last night offered to show the world their incredibly healthy balls.

As researchers linked long-term marijuana use to testicular cancer the Caribbean island's male population said anyone who doubted the vigour of their balls should board a plane to Kingston immediately and cup them.

Sir Denys Finch-Hatton, the governor general, said even the briefest of cupping sessions would confirm the rude health of the nation's testicles.

He added: "Of course no-one round here can do a day's work and the transport system is little more than an elaborate hoax, but my God, the balls.

"Firm, flawless, magnificent. In fact, if you're ever listening to UB40 and you hear an instrument that sounds like the bongos, it's actually a Jamaican man playing his own nuts."

Winston Golding, an occasional fisherman from Trenchtown, said he had smoked the ganja all his adult life with no detrimnetal effects on his stupendous gonads.

He added: "Mr Scientist, if ya be thinkin' me balls are so diseased then why don't ya and Mrs Scientist come to Jamaica and have a closer look?

"But I tell you now, once ya missus get a sight o' me glorious knackers, ya be phonin' the airline tryin' to get a refund on her return ticket."