THE teenage girl working in Topshop today is in direct in contact with the CEO and will pass on all your thoughts on how the retailer should be operated, she has confirmed.

Nikki Hollis, aged 19, of Topshop in Leamington Spa has almost complete control over which lines are stocked, which sizes are available and pricing so is the ideal person to approach with any issues.

She said: “I was scanning and folding a customer’s purchases when she upbraided me on our ‘unflattering’ summer lines and yes, she had definitely come to the right person on that.

“She also said that our Coventry branch had more choice, and that this one needed more people on the till as she’d been queueing for four minutes. Again, two issues well within my remit.

“My next customer tried to negotiate a discount on a T-shirt because of a make-up stain, and of course all part-time Topshop staff are expected to involve themselves in haggling. It’s just part of the job.

“Finally, I was told I should be ashamed that our white denim skirt wasn’t available in a size 20, and I agreed that I certainly should be as I was personally responsible for that decision. Received and understood.

“I’m going to have a lot to tell Sir Phillip Green about in our next meeting. Oh wait, that won’t happen because he doesn’t know who the fuck I am and doesn’t care.”

Which minor, shitty Friends character are you? 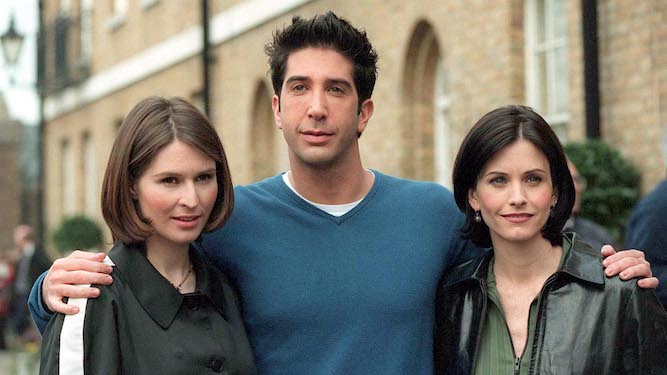 LET’S face it, you’re not a main character even in your own life, and you certainly wouldn’t be in a seminal New York sitcom. But which crappy four-episode Friends walk-on are you?

– Are you amiable enough but basically there to facilitate a couple of funny plotlines for other people, and nobody can even remember when or where you stopped being around? You are GARY, the cop Phoebe dated in season five.

– Did you seem like a big deal at first but after a short while everyone despised you so completely you were dumped by phone, and you’d already pissed on your chips with your original mates so when they get together now you’re left out of that as well? You are EMILY, and you fully deserve it.

– Was there never any good reason for you to be there, everyone always hated you, and once you’re gone it was as if you never existed? You are MARCEL the monkey.

– Do you still tell the story of how you got involved with this one guy but then fell in love with his best friend and they fell out over you because it was the most exciting thing ever to happen to you, not realising they’ve both long since moved on and think of you never? You are KATHY. Remember? The actress one. Kathy.

– Was your thick, dark moustache, your trademark and your curse, the reason you got to bone your buddy’s twentysomething daughter for far too long? You are RICHARD, and dude that was seriously not cool.

– Are you a smarmy, obnoxious loser who got to hang out with fun people because your college friend made fun jokes and your sister was hot? You are ROSS, and you were never anything other than a minor character, don’t kid yourself.