THE wealthy industrialists who fund the Conservative Party have reminded Theresa May that they are in charge of Britain’s immigration policy.

As the Tory leader unveiled a manifesto pledge to limit Eastern European immigration, bosses in the food, hospitality and construction industries, laughed and pointed out the link between cheap labour, profits and ‘donations to political parties’.

Sir Denys Finch-Hatton, who owns 25,000 acres of farmland, a building company and a chain of mid-priced hotels, said: “Like 9,000 Polish people, Mrs May works for me.

“I understand that she has to appease those who voted for Brexit in the belief that all the immigrants would be sent home, but I live in the real world where I’m in charge.

“I like a bit of ‘creative marketing’, but not as much as I like enormous amounts of money.”

A Tory spokesman said: “Will this be in the Daily Mail?”

Landlord confirms that pint is meant to taste disgusting 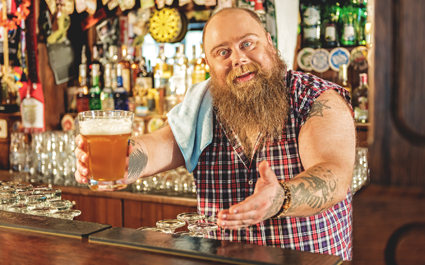 A PUB landlord has confirmed that a suspicious pint of ale is meant to taste and smell absolutely vile.

Customer Nikki Hollis returned her pint of Railway Days IPA to the bar after noticing that it smelled and tasted like a dead squirrel wrapped in a wet sock.

However landlord Roy Hobbs reassured her that it was ‘fine’.

He said: “There’s nothing wrong with that. That’s exactly how it’s meant to taste.

“I would drink that no problem. Even though it’s vile.”

Hollis replied: “Even if nothing has gone wrong in the manufacturing and storage of the beer, surely the end product is still unbelievably disgusting.

“Isn’t that a problem in itself?”

Hobbs responded by saying she could have something else if she wanted. But he turned half-away from her as he did so, so that she could tell he did not mean it.