THOUSANDS of Amazon orders will be incorrect because its warehouses are mostly staffed by undercover journalists. Over 80% of the retail behemoth’s frontline workforce are too busy writing about their working conditions to do their jobs properly.

An Amazon spokesman said: “The worse you treat undercover journalists the more they like it, which is a real boon for any employer, but sadly they’re so absorbed in composing their pieces they keep screwing up.

As a result close to half of our Christmas orders will be incorrect, late, or appearing in short segments on tomorrows Newsnight.

Anyway, if youll excuse me I just need to make a few notes on how stressed this press briefing has made me.

“Not that Im a journalist or anything, Im justreally keen on notes.

Amazon customer Francesca Johnson said: I ordered the new Arcade Fire album, and instead got a pocket tape recorder into which someone has dictated an article about timed toilet breaks.

It’s actually quite good to listen to in the car, but its not what I asked for.

Undercover reporter Julian Cook said: The rapacious expansion of Amazon threatens to turn us all into 21st century serfs, which is why Im selflessly seeking to expose its terrible working practices. 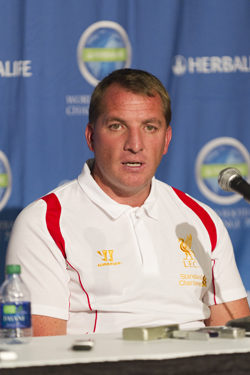 “Laughter has a healing power”

Protestors outside the KC Stadium had demanded that the Liverpool board bring back the slapstick style of play that fans have enjoyed over the last few decades.

The demonstration was headed by former player and beloved physical comedy performer Djimi Traore, who managed to fall over three times and accidentally set fire to his banner.

Manager Brendan Rogers said: We rested Danny Sturridge to make sure he stopped his run of scoring goals and Skrtel continues to be the most brilliantly uncoordinated man Ive ever worked with, so it all went to plan.

Its one thing losing to quality teams like Southampton and Arsenal but if we really want to challenge for a bottom-four place we have to be having our arse handed to us by the small boys, too.

The return of Joe Allen to the side, whom fans affectionately refer to as Like if Xavi had a stroke, and the continued existence of Iago Aspas, all bode well for Liverpools future mediocrity, but most agree that Suarez needs to leave as soon as possible.

Liverpool fan Wayne Hayes said: He may be an abusive cannibal with a dubious centre of gravity near the penalty area but the way he controls the ball and makes it go in the net just isnt the Liverpool way.