WORKERS are being asked to attend more pretend training sessions in a bid to increase the amount of bullshit there is.

New workplace regulations mean all employees must spend at least 14 days a year in a Travelodge meeting room while an orange woman called Jan gives them biscuits and asks them to shout out random words.

The new laws were backed by training providers including Nathan Muir, a former car boot salesman who is now managing director of the career development firm Effectualize.

He said: “Our most popular course involves dividing delegates into teams and asking them to brainstorm the ‘concept’ of ‘owls’.

“But we also do some very intensive IT training which is basically learning how to use Google stretched out over four days and 48 cigarette breaks.”

He added: “Today I’ll be writing the word ‘diversity’ on a whiteboard and asking everyone to say the first thing that comes into their head. I then choose one answer at random and treat it like it’s the Theory of Relativity.

Call centre team leader Roy Hobbs said: “My most memorable courses were Introduction to Turning Things On, Thinking for Beginners and Intermediate How To Do Your Job Module 3.

“But for me, training courses are a vital opportunity to re-engineer my career environment and work out which of my female co-workers I’d like to fuck.”

Business park office unit Nikki Hollis added: “Going on work-related courses has helped my team and I to bond in the shared realisation of the utter futility of everything.”

But We Hate Ourselves, Britain Tells Brown 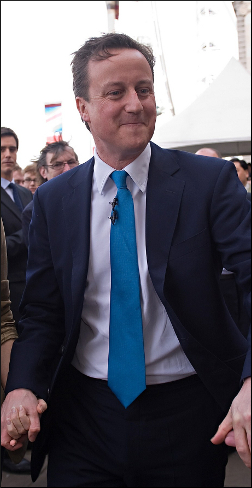 The prime minister kicked-off Labour's campaign by contrasting his spite-filled ordinariness with the rich and happy background of Tory leader David Cameron.

Reminding voters of the way David Cameron swaggers around with his riding crop while deciding which scullery maid to impregnate, Mr Brown said: "He's all smiles and fancy boots, while I, on the other hand, am chronically self-conscious, scared of French food and have horrible furniture.

"I have half a dozen everyday ties and two special ties, while the trousers I'm wearing don't really fit properly because they're from a department store.

"And unlike my opponent I do not walk between the raindrops. I stand there in the rain getting soaked and being disappointed in life."

He added: "I want to help build a country where everyone, no matter where they come from, can be filled with exactly the same amount of squirming awkwardness and debilitating resentment."

Tom Logan, a voter from Finsbury Park, said: "I watched Gordon Brown give his speech yesterday and thought, 'he is like me – and I fucking hate me'.

"I use workplace aggression as a substitute for genuine self-confidence, I've never added fish to scrambled eggs and I waste a huge amount of time obsessing about why Billie Piper's husband obviously thinks he's better than me."

He added: "I want to be like David Cameron or Richard Branson or one of those actors that went to Eton and now play detectives on American television. I want their easy charm and their excellent trousers that were obviously made by the same man who measured their legs."

The Tory leader shrugged off Mr Brown's attack during a campaign trip to Yorkshire and the Midlands where he slapped lots of poor people on the back and laughed at whatever it was they were saying.

Bill McKay, a disabled pensioner from Wolverhampton, said: "I was explaining to him how I had lost my foot to diabetes and that I was still waiting for a mobility scooter and that I keep falling over in the kitchen, and he just kept laughing and saying 'that's brilliant'. I thought he was very charming."

Meanwhile Lib Dem leader Nick Clegg said something about 'fees' or possibly 'cheese', as if it matters in the slightest.