AFTER being a total communist and gorging myself on kolbasa for almost two weeks, I decided to embark on the famous 'Trotsky trail' and jump on the next Aeroflot to South America. I'm sure if he'd been around today, he would never have gone to stinky Mexico and had communism with moustachioed artists. Like me, he would have come straight to Columbia to undulate frantically like the artist who gets her Ladyshave out once in a while: Shakira!

When I was 12, me and my mate Tiffany spent many evenings learning how to do Shakira's hip shaking moves so we could impress everyone at our end of term disco. It has to be said, we blew all the other girls away – they just couldn't match our pelvic skills. And when Mr Donaldson tapped us on the shoulders and told us to stop, it wasn't because, as he claimed, we were going to fall off the Tuck Shop table – it was because he was so turned on he thought his wife would batter him, the manky old pervert.

But now, here in Bogota, I could finally put my turbo arse-vibrations to proper use on sexy Latino men who looked all earnest and macho, like in a Madonna video. The old lady at my hostel was so excited when I told her I could dance like Shakira. She said Shakira was like Maria Mother of God because of her humanitarian work and lovely blonde hair. I gave her a quick look at my moves and she suggested I might want to marry her son. He looked pretty hot in his photo, but I just don't know if I’m ready to settle down. She told me I might want to go to the Pepino Caliente club down the street to showcase my buttock arrangement.

Pepino Caliente started off pretty quiet, but then people started getting up to dance and by midnight and a tanker full of tequila, it turned into this massive frottage bonanza with everyone doing Shakira moves up against other's bums. It was so much fun and I could really feel Shakira's humanitarian vibes rattling all over my booty.  Plus, I kept my clothes on so I'm probably not pregnant. Bonus!

I ended up having to leave before the action was over though as sadly, my pelvic floor wasn't up to snuff and eventually a little bit of pee came out. I went to the loo to check if it could be disguised as a shadow on my jeans, but alas, I had obviously pissed myself. Fail!

I came to Columbia to be just like Shakira, but I ended up more like Fergie – drenched in my own urine and singing Copa Cabana at the top of my voice in the taco queue. But happily, everyone was too drunk to notice. And that's what makes Columbia the greatest country in the world! 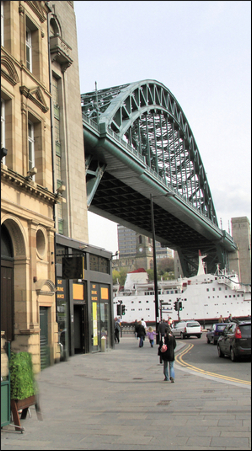 NEWCASTLE United fans resumed their adorable self-confidence last night by insisting their team was on course to win the Premier League next year without conceding a single goal.

The Magpies clinched promotion yesterday after the rest of the Championship allowed them to be promoted just to see how funny it will be when they go straight back down.

Nottingham Forest manager, Billy Davies, said: "We had a meeting last August and agreed it was worth sacrificing a promotion spot just to see the looks on their fat little faces when they lose 7-0 at home to Birmingham."

But Wayne Hayes, secretary of the Newcastle United Supporter’s Club, said: "It's been a long hard year of not being able to make ridiculously confident predictions based on nothing.

"But that's the price you pay when you give your heart and soul to the biggest and most successful football club that's ever existed."

He added: "I've told my local tattooist to order in a big bucket of black ink so I can have 'Champions Of Europe 2011' etched into my stomach next week."

Meanwhile owner Mike Ashley has thanked manager Chris Houghton for winning promotion by immediately firing him and scouting for a household name who will be utterly useless.

Ashley said: "We're already in talks with Cheryl Cole's people and I've asked that actor who played Brian Clough to be her assistant."

He added: "Wait a minute – what about Nelson Mandela?"