ADMINISTRATORS were last night called in to retail chain Ethel Austin, as thousands insisted it definitely went out of business no later than 1961.

Industry experts continue to debate what Ethel Austin actually did, with some saying it was the Victorian version of Primark for toddlers while others claim it never existed at all and was merely a plot device in early episodes of Coronation Street.

But recently uncovered parish records from 1648 seemed to settle the argument, with a brief entry stating: 'Mistress Ethelle Austyn hath opened a stalle nere the riverside for thee sale of divers and chepey shyte'.

Crypto-retailologist Charlie Reeves said: "We have some blurry photos from 1955 but we can't make out what's in the window. It's either shoes or pork. Or possibly some form of shoe pork.

"Meanwhile an excavation on a possible Ethel Austin site in Carlisle has uncovered an awful lot of what seem to be sacrificial pasties."

Eighty-seven year-old Margaret Gerving, believed to be Ethel Austin's last surviving customer, said: "Mam and me went to a branch in Crewe. It were very dark and I remember a fierce-looking woman tellin' me not to touch anythin'. Mam left the shop with a box wrapped in brown paper and never said a word. I asked her about it when I turned 21 and she went drip-white and slapped me face. She died not long after."

Mrs Gerving added: "But I do remember how every Sunday evening me dad would clean his brogues with a nice bit o' shoe pork.

"'It's Austin's shoe pork' he'd say and we'd all stare at him like he were Douglas Fairbanks." 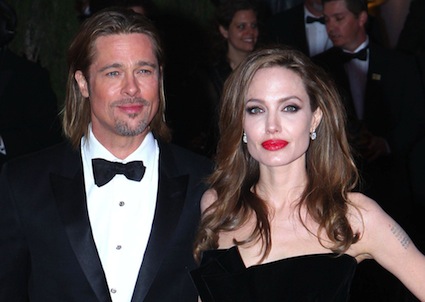 PASSAGES in the Old Testament predicted the split between Brad Pitt and Angelina Jolie, according to a leading academic.

Professor Henry Brubaker, of the Institute for Studies, made the discovery while scouring passages from the Dead Sea Scrolls for unusual varieties of plague that might work in a ‘Survivors-type’ screenplay he is writing in his spare time.

He added: “There’s loads of celeb juice, including some top-notch stuff on the Brangelina meltdown, how their $300 million fortune will be divided and what’s really going on with Jen.”

Professor Brubaker highlighted a passage from Isiah’s ‘Chit-Chat to the Simeonites’ which appears to describe an ambiguous meeting between Pitt and his ex-wife:

“And Brad shall attend a pool party at the dwelling place of Harvey Weinstein, to celebrate the issuing forth of a maverick cop buddy movie starring himself and Owen Wilson, at which she who is Jennifer Aniston shall also be present.

“And they shall partake of wine and broth and discuss how indeed they were good together back in the time of King Zebulon and the plague of toads.”