THE Caravan Club yesterday celebrated causing its one millionth traffic jam of this year’s holiday season, beating its own previous record by a full two weeks.

Club members David and Enid Jackers created an 18 mile tailback on the A82 between Tarbert and Crianlarich before 10am by driving along the narrow road at four-and-a-half miles an hour using a Morris Minor to pull their 26 ft six-berth Elddis Crusader Super Storm.

The Jackers said they were “surprised and amazed” to have caused such a memorable jam when they were stopped and told of their achievement by jubilant Caravan Club officials just outside Tyndrum.

Mrs Jackers said: “We were totally shocked to learn about the huge traffic jam on the A82, the roads around here just seemed so quiet and peaceful to us as we pottered along, we hardly saw any cars at all.

“We thought that it must have had something to do with the value of the pound keeping all the foreign tourists away.

“Instead it turns out that it was just us and our little holiday home on wheels causing a minor inconvenience to a handful of our fellow motorists.”

The Caravan Club was set up 100 years ago this week with the express aim of creating misery and delays on the roads of Britain.

Robert Preston, 43, a photo-copier salesmen from Clydebank who was four hours late for an appointment in Oban thanks to the Jackers, said: “Kill them, kill them all.”

'Flash! Flash! I Love You! But We've Only Got 14 Hours To Save Dobbies From Tom Hunter!' 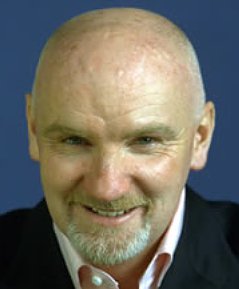 DOBBIES the garden centre was in mortal danger last night after the launch of a hostile takeover by Emperor Tom Hunter of the Planet Mongo.

Hunter wants to use the £160 million acquisition as a strategic foothold in the burgeoning home improvement sector as well as a means of enslaving the entire population of Earth.

Dobbies, which is also Scotland's largest OAP drop-in centre, has been described by city analysts as 'humanity's last, best hope' against the forces of evil inter-planetary takeovers.

The all-conquering Hunter is one of the galaxy's most terrifying and merciless retailers.After a typical childhood in the Evil Imperial Household on Mongo, he set out, aged 14, to sell plimsoles from the back of a van in Ayrshire.

Thanks to a keen business acumen and regular deployment of War Rocket Ajax he was able to annihilate his competitors and build Sports Division into one of the biggest volleyball retailers in the west of Scotland.

He sold out to JJB Sports and returned to Mongo where he assumed the Imperial Throne and began plotting to take over the universe. His only respite from wickedness is the occasional game of tennis with ex-President Bill Clinton.

A spokesman for Hunter said: "The final piece is about to fall into place. Soon your annoying little planet will kneel before the Great Emperor and enjoy an even wider range of top quality patio furniture at frankly unbelievable prices."