CHERYL Cole has angered fans after it emerged she will perform on the X-Factor using a remote controlled, animatronic mouth to mimic the appearance of live miming.

On this Saturday's show Cole will perform her debut solo single, Fight for this Nightlcub Toilet, while standing behind the computerised mouth as a team of specialists use long syringes to fire fake tears into the corners of her eyes.

An X-Factor spokesman said: "For performers of Cheryl's stature, it is now standard practice to use a state-of-the-art pseudo-mouth.

"Rest assured, we've picked out a lovely, wide juicy one, not some tiny Dot Cotton thing that looks like a cat's bumhole.

"It's made of latex rubber and acrylic polymers and can be controlled from up to 300ft away. We basically just strap it to her face and turn on the music. All she has to do is waggle her legs around for about three and a half minutes."

He added: "It can get a bit messy during rehearsals because Cheryl often confuses it for her own mouth and tries to push little sausages into it."

Meanwhile, TV watchdogs described Cole's animatronic mouth as part of a worrying trend where producers use sophisticated technology to make performers appear talented, or in some cases, human.

An Ofcom spokesman: "Hands up who knew that Kate Thornton is actually a heavily-photoshopped settee, or that Philip Schofield is a part-wolf cyclops covered in psoriasis?"

Children Should Be Educated, Say Experts 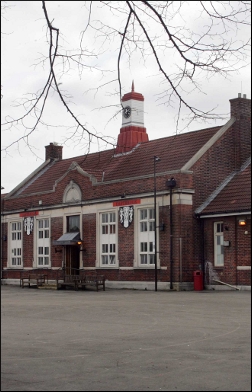 BRITISH children should be taught things by trained professionals in some sort of large building, according to a major new report.

The Institute for Studies has set out detailed proposals for a concept known as ‘education’ which would be conducted by ‘teachers’ in a network of purpose-built facilities called ‘schools’.

Institute director, Professor Henry Brubaker, said: “In a world of ever-increasing reading, writing and adding up, we believe it is time for Britain to establish, what we have termed, an ‘education system’.”

Under the Brubaker plan children would be brought together in groups of 20-30 for about seven hours a day, with an hour for lunch as well as shorts breaks in the morning and afternoon to give them time to be utterly vile to each other.

Until the new schools can be constructed, Brubaker has proposed using the buildings where children currently go to swear, fight and contract herpes and chlamydia, while the existing staff in these buildings could be trained how to teach them instead of just sitting around all day, counting their money and waiting for their next holiday.

Prof Brubaker said: “The ‘teaching’ will concentrate on the reading and writing of words and the arithmeticking of numbers. Any child who is unwilling to learn these things would be set upon with a dirty great stick.”

He added: “There has been some debate over the age at which this ‘education’ should begin, though at this stage we should probably just focus on making sure that it does actually happen at some point.

“My personal view is that it should be before the child is big enough to call me a prick and then break into my fucking car.”