A RUGBY player has been handed a 12-week ban after injuring an opponent in an insufficiently violent way.

Leinster's Shane Jennings was found guilty of eye-gouging despite having a clear opportunity to take a pair of pliers to his opponent's testicles while stapling his nose to his buttocks.

Jennings insisted: "I'll now focus my life-threatening activities on pulling people's scrota past their arse-cracks, chewing their feet off or thrusting their head into a bucket of piranhas."

A European Rugby Cup spokesman said: "This is the kind of predictable, eye-based violence we are trying to stamp out. Unlike stamping which we are all in favour of, especially if it's right in the eye.

"These players are trained to pull opponents kneecaps off and wear them as monocles. We teach them how to break people's fingers in so many places they can spell out the word 'Rugby' and we show them how to kick someone's jaw so hard that you may as well use it for soup. Eye-gouging just seems lazy."

He added: "I remember one match a few years ago where the number eight punched the fly-half so hard up the ring-piece it was basically Keith Harris and Orville the Duck without the squeaky voice. Happy days."

Law 10.4 of the rules of rugby union football states that while casually kicking someone repeatedly in the eyebrow or eyelid is acceptable, attacks on the eyeball must be carried out in a way that does not bring the sport into disrepute.

Meanwhile the International Rugby Board has welcomed the decision, insisting it would once again send a clear message that rugby is not a sport for homosexuals, despite the well-established mountain of evidence to the contrary. 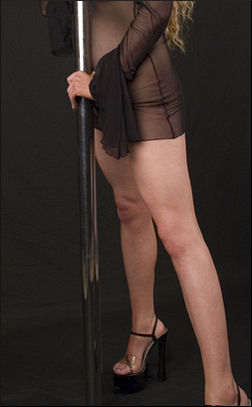 THE manager of a Swindon table dancing club last night offered members of the public the chance to express themselves on a plinth, especially if they have big tits.

Eddie Harris, owner and resident compere at Korky Katz, has created an 'interactive platform for creative expression for semi-attractive women under 35' who were unable to take part in Anthony Gormley's public art project.

Mr Harris said: "We don't actually have a plinth, but there is a shiny metal pole and a slightly raised area made from old pallets covered in chipboard.

"It's a unique artistic environment with plenty of chrome and smoked glass, while musical ambience is provided by our resident DJ Beefy playing a selection of 80s floorfillers and plenty of smooth R&B to promote pelvic grinding."

Mr Harris has recently completed an Arts Council grant application to fund his project, which he has entitled 'Friday Nite Hotness at Korky Katz with 2-for-1 on Metz'.

"I used the word 'facilitate' in every other sentence and assured them that while there will be lots of birds' tits and that, the whole thing will be steeped in irony. I'm hoping to get about six grand."

He added: "Basically, the 'living sculptures' can do whatever they want as long as it involves bare bums. But mind out for my terrier cross 'cause he does like to run onto the stage and start licking the performers' thighs.

"I've tried to stop him but he's a randy little bastard, and I can't bring myself to have his knackers off."