Bill Gates to buy GQ and burn it to the ground

BILL Gates is to buy men’s magazine GQ, sack everyone, evacuate the building and set fire to it.

He said: “I am giving all of my money to charity. And that’s more money than anyone has ever had. I’m not saying I want the award, I’m saying ‘I’m going to destroy you’.

GQ editor Dylan Jones pleaded with Gates adding: “It was a simple mistake, we thought philanthropy was an old fashioned word for property investment.

“Anyway, the main thing is Tony Blair now knows who I am.” 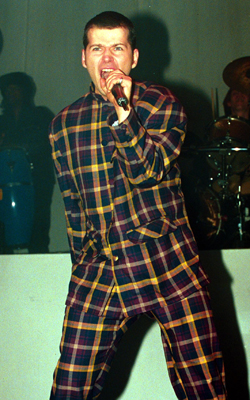 BRIAN Cox has recruited members of his old band as astronauts for an asteroid-smashing suicide mission.

The band has requested tartan spacesuits

Following Coxs warnings that a giant space rock is hurtling towards Earth, NASA agreed to supply a shuttle which the physicist and his former D:Ream bandmates will pilot on a perilous journey to save mankind.

Cox told his fellow musicians they would probably not be coming home: I explained there was an asteroid the size of Swindon hurtling towards Earth, and that we would need to land a shuttle on it, plant a nuclear device then somehow escape with our lives.

Its basically a suicide mission but if we survive the United Nations has promised us a major label album deal and a stadium tour.

Experts put D:Reams chances of survival at less than one in a trillion.

Former astronaut Tom Booker said: The singer, Pete Cunnah, should be lead pilot because frontmen have the combination of flair and bravado needed to pull off risky manoeuvres.

Cox is the obvious choice for priming the nuclear bomb due to his nimble keyboard-playing fingers.

I also suggest taking some backing dancers as they are easily replaceable and it doesnt really matter if they get sucked into space while repairing the craft.

The main thing is to stay focused and not let creative differences, for example over whether future material should incorporate dubstep elements or stick with the club anthems route, condemn humanity to a fiery death.